I know that social media lends itself to vitriol, but for sheer ugly invective I don't think I've ever seen anything like the posts regarding the controversy over who gets to use the restroom in North Carolina.

House Bill 2, titled the Public Facilities Privacy and Security Act, was signed into law by Governor Pat McCrory in March.  The bill prohibits transgender individuals from using the restroom for the gender they identify with; they have to use their restroom based on what genitalia they have.

Notwithstanding the fact that it's gonna be hard to enforce -- what are they going to do, have an armed guard outside the restroom making everyone drop trou before they let them in? -- supporters of the bill laud it as preventing "perverts" from going into the "wrong bathroom."  "One of the biggest issues was about privacy," North Carolina House Speaker Tim Moore said.  "The way the ordinance was written by City Council in Charlotte, it would have allowed a man to go into a bathroom, locker or any changing facility, where women are -- even if he was a man.  We were concerned.  Obviously there is the security risk of a sexual predator, but there is the issue of privacy."

So the issue of safety for transgender individuals is not a concern? 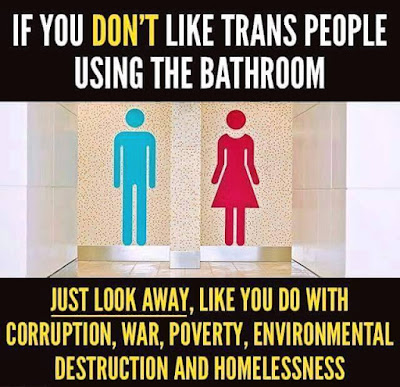 I'm sorry, gender is not as simple as what equipment you were born with.  There are at least four different biological constructs related to gender -- anatomy, chromosome makeup (XX or XY), sexual orientation, and brain wiring (i.e. what gender you feel yourself to be).  These don't line up the way you'd expect a considerable amount of the time, and that's not even considering the fact that some of these are a spectrum (i.e. bisexuality).  So looking at gender as a black and white, either/or situation is simply ignoring the reality.

The whole thing has been cast as a way of keeping sexual deviants out the bathroom -- i.e., as a way of protecting innocent cisgender people.  The reality, of course, is that the vast majority of people who commit sexual crimes are cisgender; a study by the Human Rights Campaign last year was unable to find a single substantiated case of a sexual crime committed by a transgender person.

Wonder why that is?  Maybe it's being on the receiving end of bigoted legislation, not to mention vicious slander in the press every single day, you think?

But none of that seems to matter.  Hype, prejudice, hatred, and invective are the order of the day on this issue.  Just yesterday, Liberty Council President Anita Staver posted a tweet saying that because of the uproar over transgender people using the bathroom, she was planning on bringing her Glock .45 into the ladies' room with her, because it's her "bodyguard."

Odd, isn't it, that the Liberty Council's mission statement "is to preserve religious liberty and help create and maintain a society in which everyone will have the opportunity to discover the truth that will give true freedom."

Except, apparently, if you were born different.  In that case, you can get shot just for looking for a quiet place to pee.

What points out even more starkly the hypocrisy of this stance is that when a high-profile right winger -- former Speaker of the House Dennis Hastert -- is accused of sexually abusing four boys, there has been a rush by his colleagues to defend him.   Former House Majority Leader Tom DeLay said about Hastert that he is "a good, godly man with very few flaws and who doesn’t deserve what he is going through."

So this isn't about preventing sexual crimes.  Just like the Jim Crow laws in the Deep South were never about water fountains.  This is about finding a license to hate people who aren't like you -- and, as DeLay shows, making any number of undeserved excuses for the ones who are.

The vitriol continues.  Just yesterday I unfriended someone on Facebook who posted a meme threatening violence against any transgender person who went into "the wrong bathroom."  I try to be tolerant -- I have friends of various religions (and no religion at all), of all places on the political spectrum, and with just about every ethnic background you can think of.  So as you can imagine, I see lots of things in my Facebook feed that I disagree with.

Which is entirely fine by me.  Liking you doesn't mean always agreeing with you.  But if you imply that you have the right to harass or physically injure someone who isn't exactly like you, that crosses a line in our relationship beyond anything I'm interested in repairing.

For those of you who are still on the fence about the whole "bathroom bill" issue, I have a suggestion.  Find some people in your community who are transgender, and talk to them.  I have had three students who are transgender and who have opened up to me about it, and I can say honestly that I learned more from hearing about their experiences than I could have learned from any number of news articles.  Do you doubt that transgender is real?  Go to a local center for LGBT equity -- most communities have one.  Walk in with an open mind, and get to know real people who deal with this prejudice every single day of their lives.

And until you have the courage to do that, stop posting inflammatory memes on social media.  First, you don't know what you're talking about.  Second, you come off sounding like just as big an asshole as the "separate but equal" bigots did back in the 50s and 60s.

And third, you're missing out on learning about the experiences of people who are not like you.  Which is about as critical a lesson in personal growth as anyone can have.
Posted by Gordon Bonnet at 3:03 AM