Message in a bottle

The possibility of communicating with an alien race has been a mesmerizing idea for decades.  Even if the science fiction movies of the 1950s mostly depicted aliens as bug-eyed dudes with rubber masks who were intent on destroying civilization as we knew it, the fact that there were so many such movies indicates the level of fascination we had even back then.

Then came the 60s, and Lost in Space, which was so abysmally bad as to be comical, but which had one episode in the first season called "The Sky is Falling" that transcended the idea of extraterrestrial-as-monster; it featured a family of silent aliens (who, to save on makeup and costumes, looked like humans in vaguely Ancient Greek clothing) who were thought to be hostile -- until it turned out that all they wanted was to keep their family members safe, and to meet friendship with friendship.  It was a unique approach back then, and stands out in my mind as one of the best episodes they ever did (not that there was all that much competition in that regard).

Although we've had other horrific concepts of creatures from other planets -- Starship Troopers, Alien, and The Invasion of the Body Snatchers, to name three -- they're counterbalanced by stories like Close Encounters of the Third Kind and, most strikingly, Star Trek: First Contact, which featured a scene that still strikes me as one of the coolest visual images ever -- the first time a human, physicist Zefram Cochrane, shakes hands with a Vulcan: 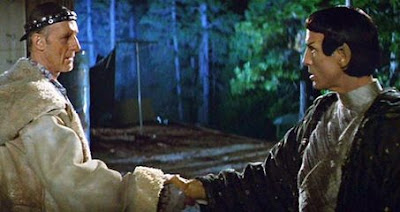 My thought, when I saw this movie in the theater when it first came out, was, "This would be the coolest thing ever."

Unfortunately, given the distances involved, it's unlikely that we'll ever be visited -- or that we'll ever visit another star system ourselves.  That doesn't mean we can't communicate, though; all it means is that we have to do it a different way.

The idea of sending a message to the stars is near and dear to the heart of journalist Jon Lomberg, who helped Carl Sagan in the design of the golden disks that were sent up on the Voyager missions in 1977.

This time, though, Lomberg wants to go one step further -- he wants to send a detailed digital message from Earth to the New Horizons probe, currently somewhere out past the orbit of Pluto, with the idea that the probe will then carry the message into space.  Where it is possible that it could be intercepted by an intelligent race of extraterrestrials, and the message decoded.

Lomberg wants contributions of what to say -- so he started a site called One Earth: New Horizons Message where people can submit what they'd say to an intelligent alien if they were in Zefram Cochrane's shoes.  "This will be a message from and to the Earth," Lomberg said.  "The very act of creating it will be a powerful reminder that we all share the same, small planet.  We are truly one Earth."

Which is just immensely cool.  I don't know if I'll submit anything -- I don't know that I can come up with anything profound enough to warrant saying to an alien race, and honestly, in Cochrane's place, I'd probably have been so gobsmacked that I would not have been able to get out anything more articulate than "Ub... ub... ub... ub... ub."  But I encourage you to go to the site if you can think of something better than that.  Maybe your submission will be chosen for transmission to New Horizons, where it will then be stored in memory more or less indefinitely.

And perhaps, one day, the probe will be picked up by a passing spaceship, and the message in a bottle decoded.  You have to hope it'll work out better in the end than it did for the alien race in one of the all-time best episodes that Star Trek: The Next Generation ever did, "The Inner Light."  (I've seen this one several times and still cry like a little girl at the end every single time.  If you've seen it, don't lie -- you do, too.) 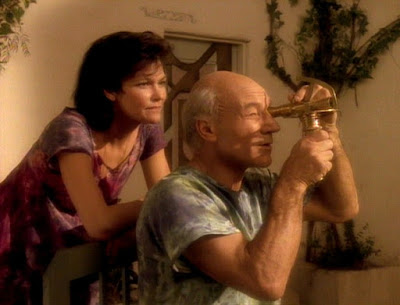 So that's today's cool science stuff.  If you decide to submit something, post it here in the comments.  Not only are the aliens eagerly awaiting your message, I have to admit to some curiosity, myself.
Posted by Gordon Bonnet at 3:29 AM