If you needed any further indication that the woo-woos of the world have no particular concern whether there's any evidence to support their views, witness the fact that there are already conspiracy theories floating around regarding why Prince died two days ago at age 57. 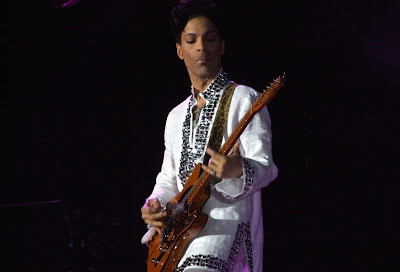 First, we have Alex Jones, who more and more is looking like he's spent too many hours doing sit-ups underneath a parked car, claiming that Prince died of the "chemtrail flu."  Whatever the fuck that is:


The artist known as Prince has died suddenly of a mysterious illness, just like Merle Haggard, and both men previously spoke out against chemtrails many have suggested are responsible for a surge in respiratory illnesses...  A mysterious illness has been spreading across the U.S., coinciding with massive chemtrail spraying – and it’s possible the two are linked.

Sure.  "Possible," even though the flu is different from chemtrails in that the flu actually exists.

Then we had anti-vaxx wacko Gary Barnes over at the dubiously sane site Truth Kings claiming that no, it wasn't the flu that killed Prince, it was the flu vaccine:


The medical emergency which caused the plane to land [following one of Prince's concerts] remains unclear, but suspicion is now high that Prince was potentially given a flu shot injection or heavy doses of Tamiflu.  Prince suffers from epilepsy, and the flu shot can be deadly for those suffering from that illness.  The key will be the discovery of Prince being given a flu shot, which isn’t clear as of yet.  However the situation seems to reflect such potential.

Right!  There's always the potential for the world to change itself in order to conform to your lunatic views!

But no Parade of Wingnuts would be complete without a contribution from Mike "The Health Ranger" Adams of Natural News, who says that Barnes et al. are crazy -- Prince did not die from a flu vaccine, because Prince was way too smart for that, and knew that flu vaccines are deadly:


I find it highly unlikely that someone who holds a concern about chemtrails would allow themselves to be injected with a flu shot. In his interviews, Prince comes off as extremely well informed about certain agendas, meaning he almost certainly knew full well how vaccines carry an increased risk of autism for people of African-American descent.

Of course.  The way to dispel one crazy rumor is to replace it with an even crazier rumor.

But wait... isn't that suspicious in and of itself?  No information means... a cover-up!  And chemtrails and deadly vaccines and conspiracies!  *pant pant gasp gasp*

Okay.  For fuck's sake, people, can't we wait and actually have some evidence, any evidence, before we start sailing off into the ether?  Oh, never mind; evidence might contradict what they've already decided is true, and we can't have that.

So anyway.  The sane ones amongst us are mourning the passing of another extremely talented and innovative entertainer, the latest in an all-too-long list of inspirational people we've lost in 2016.  As for the rest of the yammering conspiracy theorists out there: just shut up, will you?
Posted by Gordon Bonnet at 2:24 AM