I swear, sometimes humans are so weird that it leaves me not knowing what to think.

Take, for example, the Red Deer Regional Hospital Centre, in Red Deer, Alberta, Canada.  Like any good hospital, Red Deer is committed to excellence in patient care.  It's also like other hospitals in that there's never enough money to achieve everything they want to achieve, so they rely on volunteers, donations, and groups like the Friends of the Red Deer Regional Hospital to meet their goals.  The FRDRH says on their homepage that their vision is to "improve care and comfort to all patients and residents through selfless efforts of staff and volunteers," and their mission to "facilitate innovative fundraising programs for services and equipment to benefit patients and residents in our facilities."

Which all sounds fantastic.  So the FRDRH decided to hold a fundraiser to support their efforts, and as part of this fundraiser, hired...

For a hundred dollars a pop, you can have a chat with medium Colette Baron-Reid, who bills herself as follows:

Vote into the Watkins List as one of the Top 100 Most Spiritually Influential People in 2013, her reputation as a noted contemporary thought leader was firmly established.  In person or on paper, Colette delivers her message of perspective and hope with her trademarked compassionate candor peppered with a pinch of infectious personality.

So we have a fundraiser for promoting cutting-edge, evidence-based health care that involves paying lots of money to have a woman tell you she can get in touch with your dead relatives, and that Aunt Bertha is just having a jolly old time in heaven.

Which brings up a question I've always had.  When the mediums do their shtick, why do they never find that your dead relatives are in hell?  I know that given some of the people in my family, it seems pretty likely.  We always get told that Grandpa Albert is happy and wishes all of us people down here on Earth the best, but we never get messages like, "Grandpa Albert says to tell you, "DEAR GOD GET ME OUT OF HERE SATAN JUST SENT A CRAZED WEASEL TO CHEW OFF MY FEET."

Which, now that I think about it, could be kind of entertaining.  Maybe I should start my own business as a medium, specializing on getting in touch with people who are in hell.  It'd be fun to tell people, "Uncle Steve says the Lake of Eternal Fire is kind of toasty this time of year.  He also said to tell you, 'Satan said to say "see you next Thursday."'  Do you know what all that's about?" 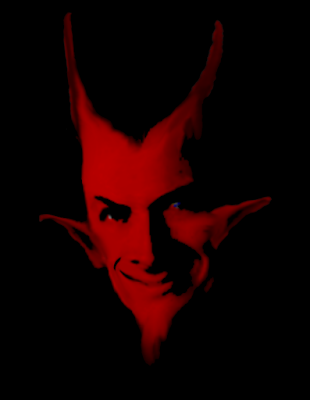 I can't argue with a charity event that raises money for a needy hospital, but for cryin' in the sink, why couldn't they have found a better way to do it?  Hire a magician.  At least with a magician, no one's pretending that what they do is real.

Anyhow, if you're in Red Deer, Alberta on April 9, and have $100 to throw away, you might want to consider attending.  I'm always curious about how these hucksters ply their trade, and would love to hear a report.  And at least you'll have the comfort of knowing that your money is going to a good cause, and not to the medium's downpayment on her next crystal ball.
Posted by Gordon Bonnet at 4:07 AM