I am asked sometimes why I care so much if people believe counterfactual nonsense.  "What's the harm?" is a frequent way the question is phrased.  "So what if folks like to check their horoscope or get a Tarot card reading every so often?  Who is it hurting?"

There are two answers to this.  First, once you've accepted one idea without requiring that it have any connection to reality, it makes it all too easy to get suckered again.  One gets in a habit of sloppy thinking -- or not thinking at all -- and the attractiveness of certain forms of woo are such that once you've started down that road, it's hard to turn back.

The second, though, is more insidious, and it is that it puts you at risk of being taken advantage of by predatory charlatans.  These are people who know damn good and well that they are liars, but are shamelessly bilking people for thousands of dollars, preying on gullibility, desperation, and grief to swell their own ill-gotten gains.

Take, for example, "psychic detectives."  These people descend like vultures on families whose loved ones have gone missing, claiming that they will gather information from The Cosmos to tell the grief-stricken whether the missing individual is dead or alive, whether there's any hope of their safe return, or (if they're dead) where the body might be found.  One session can cost $500 or more.  And driven by the loss and emptiness, together with the horrible uncertainty regarding what happened, the victims are often willing to pay.  The result?  "Psychic detectives" do a thriving business. 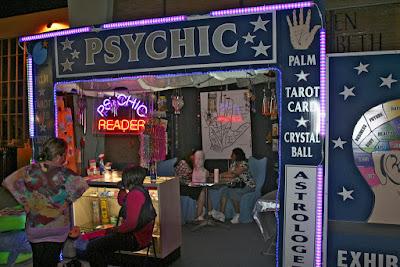 So it does my heart good to see one of them get found out.  Just last week, Inside Edition reporter Lisa Guerrero did an exposé on Portland, Oregon "psychic detective" Laurie McQuary, wherein the show's producer, Charlie McLravy, hired McQuary, posing as the brother of a missing girl.  He brought along a photograph and asked McQuary what had happened to the girl.

McQuary didn't hesitate.  The girl was dead, she said.  She hated to tell him that, but she had to be honest.  Her death was violent, and involved sexual assault.  In the end, her assailant hit her in the head with a rock and killed her.

But it went further than that.  McQuary brought out a map, and told McLravy where he could find his sister's body.  "She's right here," she said.  "No more than a mile or two away."

The next day, McQuary was brought in to be interviewed by Guerrero.  Guerrero brought out the photograph, and McQuary verified that she'd spoken to the missing girl's brother, and that the girl was dead.

"You always know... if a person is dead or alive?" Guerrero asked.

"Then would you be surprised to know that this little girl is me?"

There was a moment of pure shocked silence.  Then McQuary said, her voice faltering a little, "And... um... you haven't been abducted?"

Guerrero said, "No, as you can see, I'm right here.  Can you explain this?"

Then Guerrero went in for the kill.  "This little girl is me, and you told him she was dead.  You're taking advantage of desperate people with a bunch of hocus-pocus, aren't you?"

McQuary said, "No, I'm not," and then got up and walked off the sound stage, trying to gather whatever shreds were left of her dignity, ending with, "This has been very interesting.  You all have a very nice day."

All in all, McLravy and Guerrero showed the photograph to ten psychic detectives -- all of whom said that Guerrero had died as a child.  Not a single one said, "Um... she's still alive, she was never abducted, and in fact, she isn't your sister.  What's going on here?"

It's not that I don't understand the pain people feel over loss.  And although I've never had a close friend or relative disappear, I can imagine how hard it is not to know the fate of someone you care about.  So I have some sympathy for the grieving family members who hire these people.

But the idea that "psychic detectives" and other such charlatans are using the pain of the grieving to bilk them out of huge sums of cash, and giving them nothing in return but a skein of lies -- that is unforgivable.  And to Guerrero and McLravy, all I can say is: touché.

Posted by Gordon Bonnet at 1:56 AM