I find the human mind baffling, not least because the way it is built virtually guarantees that the most logical, rational, and dispassionate human being can without warning find him/herself swung around by the emotions, and in a flash end up in a morass of gut-feeling irrationality.

This happened to me yesterday because of a link a friend sent me regarding some of the latest advances in artificial intelligence.  The AI world has been zooming ahead lately, its most recent accomplishment being a computer that beat world master Fan Hui at the game of Go, long thought to be so complex and subtle that it would be impossible to program.

But after all, those sorts of things are, at their base, algorithmic.  Go might be complicated, but the rules are unvarying.  Once someone created software capable of playing the game, it was only a matter of time before further refinements allowed the computer to play so well it could defeat a human.

More interesting to me are the things that are (supposedly) unique to us humans -- emotion, creativity, love, curiosity.  This is where the field of robotics comes in, because there are researchers whose goal has been to make a robot whose interactions are so human that it is indistinguishable from the real thing.  Starting with the emotion-mimicking robot "Kismet," robotics pioneer Cynthia Breazeal has gradually been improving her design until recently she developed "Jibo," touted as "the world's first social robot."  (The link has a short video about Jibo which is well worth watching.)

But with Jibo, there was no attempt to emulate a human face.  Jibo is more like a mobile computer screen with a cartoonish eye in the middle.  So David Hanson, of Hanson Robotics, decided to take it one step further, and create a robot that not only interacts, but appears human.

The result was Sophia, a robot who is (I think) supposed to look reassuringly lifelike.  So check out this video, and see if you think that's an apt characterization:


Now let me reiterate.  I am fascinated with robotics, and I think AI research is tremendously important, not only from its potential applications but for what it will teach us about how our own minds work.  But watching Sophia talk and interact didn't elicit wonder and delight in me.  Sophia doesn't look like a cute and friendly robot who I'd like to have hanging around the house so I didn't get lonely.

Sophia reminds me of the Borg queen, only less sexy. 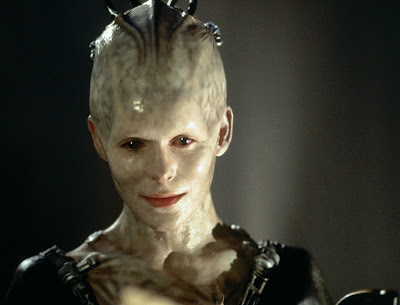 Okay, okay, I know.  You've got to start somewhere, and Hanson's creation is truly remarkable.  Honestly, the fact that I had the reaction I did -- which included chills rippling down my backbone and a strong desire to shut off the video -- is indicative that we're getting close to emulating human responses.  We've clearly entered the "Uncanny Valley," that no-man's-land of nearly-human-but-not-human-enough that tells us we're nearing the mark.

What was curious, though, is that it was impossible for me to shut off my emotional reaction to Sophia.  I consider myself at least average in the rationality department, and (as I said before) I am interested in and support AI research.  But I don't think I could be in the same room as Sophia.  I'd be constantly looking over my shoulder waiting for her to come at me with a kitchen knife, still wearing that knowing little smile.

And that's not even considering how she answered Hanson's last question in the video, which is almost certainly just a glitch in the software.

So I guess I'm more emotion-driven than I thought.  I wish David Hanson and his team the best of luck in their continuing research, and I'm really glad that his company is based in Austin, Texas, because it's far enough away from upstate New York that if Sophia gets loose and goes on a murderous rampage because of what I wrote about her, I'll at least have some warning before she gets here.
Posted by Gordon Bonnet at 2:12 AM