So the Large Hadron Collider is having problems again, this time because a weasel chewed through a power cord and shut down the whole operation.

I am not making this up.  Nor is this the first time that an animal has wrought havoc with the world's largest particle accelerator.  In 2009, a gull dropped a baguette on "critical electrical systems," and shorted the whole thing out, causing damage that required several months to repair.

These sorts of things have caused an immediate bout of eyebrow-raising amongst the woo-woos, who tend to have the belief that nothing happens by accident.  If oddball problems arise, then it is not simply because the world is a bizarre and chaotic place (an observation that in my opinion explains a good 90% of the weird events that happen).  It is an indication of a conspiracy, or a bad omen at the very least.

And the fact that twice, animals have shut down the LHC?  That can't be happenstance.

And as I predicted, already the wingnuts are beginning to ferment with speculation regarding the possible explanations for the recent Weasel Attack.  Here are a few selected comments from online news sources that carried the story:
Okay, let me address a few of these points. 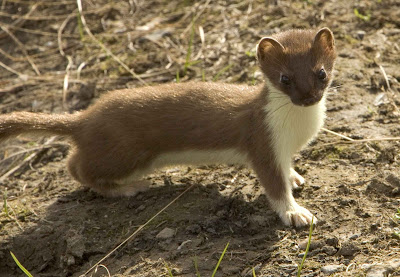 Doesn't this have the look of a time-traveling vandal from the future?  [image courtesy of the Wikimedia Commons]

Be that as it may, Arnaud Marsollier, head of press for CERN, has said that the repairs will only take a couple of weeks.  The Large Hadron [note the spelling] Collider should be back online, and ready to smash atoms and/or end the universe as we know it, by mid-May.

Unless the scientists in the future send some other animal emissary back in time to wreck it again.  Maybe this time with a highly-trained Military Attack Wombat with a strategic banana peel.  You can see how effective that would  be.
Posted by Gordon Bonnet at 2:50 AM