The site Today Christian posted an article a couple of days ago entitled, "10 Questions for Every Atheist."  The subtitle reads, "Some Questions Atheist [sic] Cannot Truly and Honestly REALLY Answer!  Which leads to some interesting conclusions…"  Because evidently we atheists never think about these things, and faced with questions have no choice but to say, "Golly!  I hadn't considered any of this!  I will go out and become a Christian immediately!" 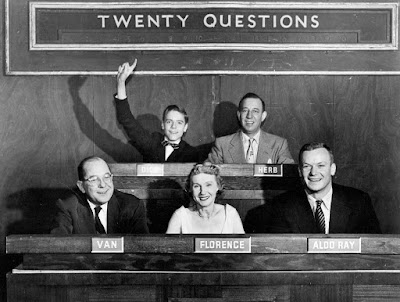 Only ten, actually, but close enough.  [image courtesy of the Wikimedia Commons]

So in the interest of setting the record straight, I thought I'd answer them.  Not that the Today Christian people are ever likely to read my answers.  But just in case.  So here they are:

Question 1:  How did you become an atheist?


I was raised Roman Catholic, and spent the first part of my life trying like hell to believe the whole shebang.  There was (and is) something attractive about there being a Grand Pattern to it all, something bigger than myself that gives meaning and purpose to life (a topic I'll deal with more in a moment).  However, after reading the bible more than once cover-to-cover, and talking with various priests, ministers, and other true believers, I was forced to the conclusion that belief came from one of three sources: (1) I believe this because it's how I was raised; (2) I believe this because I've had a personal experience that convinced me; or (3) I believe this because I was convinced by an authority figure I trust.  None of these seemed to be acceptable reasons to commit to a belief, so I started casting about for actual evidence that any of it was true.  When I was about 28 or so I realized that there didn't seem to be any, or at least no evidence that would be acceptable to someone from outside the system.  At that point, I had no choice but to admit to myself that I was at least an agnostic, and that the complete dearth of hard evidence strongly supported atheism.

Question 2:  What happens when we die?


I don't know.  I'll find out when I get there.  Furthermore, not only do I not know, neither does anyone else, despite what they'll tell you to the contrary.  Wherever death leads, it's a one-way trip, with no possibility of sending text messages back to the ones we've left behind.


Ah, yes, it always comes up sooner or later -- Pascal's Wager.  "I'd rather be a Christian who is wrong than an atheist who is wrong."  The problem with this is twofold.  Of all the gods humans have ever worshiped, how do you know that the Christian version is the one we need to worry about?  What if you die and find yourself in Valhalla?

Of course, the other problem is that it's hard to conceive of a just deity who hides every shred of available evidence of his/her/its existence, creates a world full of confusion and ambiguity, and then when people come to the wrong conclusion says, "Ha ha!  You're wrong!  Into the fiery furnace with you, sucker!"  I'm not sure that such a deity would be worthy of worship in any case.

Question 4:  Without God, where do you get your morality from?


Easy.  My morality is based on doing the least harm I can and the most good I can, and continuing to learn and grow.  This sort of attitude is seen in all social species -- sharing food, taking care of family, banding together to face dangers.  So the reason I am moral is because I'm a social primate, and morality evolved to make the social structure cohere.

Question 5:  If there is no God, can we do what we want?  Are we free to murder and rape?  While good deeds are unrewarded?


Cf. my answer to question #4.  And if the only reason you're not murdering or raping is because the Big Sky Guy says no, I think you're the one whose morality needs some analysis.

Question 6:  If there is no God, how does your life have any meaning?


I create the meaning of my life.  For me, the meaning in life comes from connections with the people I care about; from learning and teaching; and from creativity.  I don't need an external source of meaning.

Question 7:  Where did the universe come from?


Physicists are hot on the trail of this question, and current research on the topic of cosmology is tremendously exciting.  I find that people who criticize cosmology usually don't have the vaguest clue of what the physicists are actually saying, and almost never have read a single scholarly paper on the subject.  So before you start spouting nonsense like "atheists say that nothing exploded and made everything," try learning some actual science first.  Then we'll talk.


Throughout the ages, people have claimed to be in touch with gods, demons, spirits, whatever.  I think the more pertinent question for you is: if you think that such experiences are real, what about all of the Hindus who have claimed to have an experience of Krishna?  What about the ancient Greeks who believed that they'd gotten prophecies from Apollo?  What about the Cheyenne who had vision quests in which they met, and spoke with, Coyote?  Accepting these kinds of mystical experiences as real actually creates a far bigger problem for you than it does for me.

Question 9:  What's your view of Dawkins, Hitchens, and Harris?


I think they are (or were, in Hitchens's case) strident because they've needed to be.  The religious model has dominated all discussion for thousands of years; in a lot of places, it's impossible to hold public office unless you are religious.  In some places, being an atheist can get you imprisoned or executed.  But because I largely agree with them about religion doesn't mean that I agree with them about everything.  They're not the Popes of Atheism, or something.  They're human, which means they'll be right about some things and wrong about others.

Question 10:  If there is no God, then why does every society have a religion?


Let me ask you a question: if the Christian god is the only real one, then why does every society have a different religion?  The things that drive religious belief -- the desire for explanations for the deep questions, fear of uncertainty, fear of death, trust in authority -- are universal to the human condition.  It's unsurprising that many societies have landed on religious explanations.  What's more puzzling is that if only one religion is true -- and it's hard to see how they could all be true, despite what some ecumenical types might claim -- why the various religions aren't at least similar.

So, there you are.  Ten questions, ten answers.  Despite the condescending attitude of the person who wrote the original post, I've tried to keep the snarkiness to a minimum and answer the questions as honestly as I can.  Like I said, it's unlikely that this post will be read by the person who asked them; my sense is that in any case, they didn't want answers, they were just hoping to be able to say "Gotcha!" and have us atheists retreat in disarray.  But if anyone who is religious does read this, and wants to discuss these points further, feel free to post a comment.  Increased understanding is, as always, the watchword around here.
Posted by Gordon Bonnet at 1:58 AM