The Soldiers of Christ Bill

In a time when partisan rhetoric, hate-mongering, misogyny, and xenophobia are the Flavors of the Month, the Mississippi House of Representatives just passed a bill that is horrifying even by comparison to what's come before.

House Bill 786, the "Mississippi Church Protection Act," makes it legal to kill someone if you do it while you're acting as a participant in a church service or as a place of worship's "security team."

Here's the relevant section of the bill:

Does anyone else see the problem with this?  It's saying that an unregulated and untrained individual, simply by being a member of a church's "security team," is being given carte blanche to kill a person, based on their judgment regarding whether the person was committing a felony. 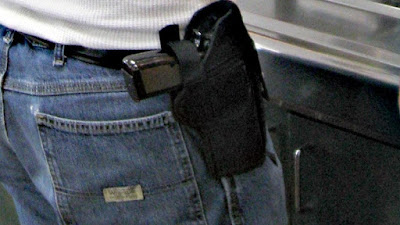 If that doesn't freak you out sufficiently, maybe the fact that both the bill's supporters and detractors are calling it the "Soldiers of Christ Bill" will do the trick.

Matt Agorist, over at the Free Thought Project, stated it clearly:


By passing this bill, the state of Mississippi effectively recognizes churches as their own sovereign entities — mini-states that are tax-free and immune from their acts of violence carried out in their official duties.


The "Mississippi Church of Protection Act" is well deserving of the title for "Worst State Bill."  This legislation would put "soldiers of God" above the law, allowing them to act as judge, jury, and executioner.  Religious institutions are already exempt from taxation, financial transparency, and many civil rights laws.  The Mississippi Church Protection Act would constitute an unprecedented and dangerous next step.  Belonging to a church should not afford anyone the same rights and protections as law enforcement.  This legislation emboldens extremists by creating a legal means for radical preachers to enlist their congregants into "God’s army."

Sean Tindell, one of the 85 Representatives who voted for the bill (33 voted against), disagreed.  He said, "The self-defense of these churches is a God-given right...  this legislation will protect the church body."

He did not comment on why churches should receive special protection via this act, and why the same claims couldn't be made for business, schools, and so on.

Interestingly, the Mississippi Police Chiefs' Association is strongly against the bill.  The MPCA's Executive Director, Ken Winter, said in an interview:


By effectively dismantling Mississippi's licensing system, this bill would block law enforcement who stop an armed suspect from confirming that he isn't a violent criminal, severely mentally ill or otherwise dangerous.  We just don't believe that it's a good idea for people to be carrying concealed weapons and not have participated in any training.

The whole thing reinforces the fact that there is a significant proportion of Americans who still think that churches should be above the law -- or, at least, not subject to the same laws the rest of us are.

It's high time we take a good hard look at the nationwide policy of treating churches as if they are nations-within-a-nation -- subject to their own rules, exempt from taxation, and largely protected by their own leaders from prosecution when laws are broken.  It's long overdue for "it's my religion" to stop being some kind of universal Get Out Of Jail Free card.  But unfortunately, with the passage of House Bill 786, we've taken a large step backwards into a time more like the Middle Ages -- when the religious authority and the secular authority were considered coequal.

And if you don't see where that can lead, you haven't studied enough history.
Posted by Gordon Bonnet at 1:59 AM