To the Moon, Alice!

Coming hard on the heels of yesterday's post about the claim that NASA has discovered a "lost day," thus confirming the Old Testament, today we'll look at the claim over at the site Earth We Are One that NASA has detonated a nuclear bomb on the Moon.

My second question, upon reading this, was, "What is up there on the Moon that is worth bombing to smithereens?"  (My first question was, "What the fuck?", which is rhetorical in any case.)  And the answer (to the second question) is:

As the writer explains it to us:


According to a set of images and alleged reports, there are alien structures on the surface of the moon, and NASA launched a 2-ton kinetic weapon to destroy them, despite international laws clearly prohibiting it.

Yes.  Article 12, clause 154 of the International Code of Law reads, "Under no circumstances is it legal to use thermonuclear weapons to bomb the shit out of aliens on the Moon."

Then we hear about NASA's LCROSS mission, which stands for "Lunar Crater Observation and Sensing Satellite," although according to the Earth We Are One folks, it is clearly nowhere near as innocuous as the name makes it sound.   NASA tells us that LCROSS's goal was to see if there is water ice in a permanently shadowed crater near the Moon's south pole, and its mechanism was crude but effective; the spent upper stage of the satellite ("Centaur") was deliberately aimed on a crash course with the crater.  The idea was that the orbiter would observe the dust plume ejected by the impact, and analyze it for the presence of water.

Which it found, by the way.

But then, NASA made the mistake of publicizing the fact that when Centaur hit the crater, it "released the kinetic energy impact of detonating approximately 2 tons of TNT (8.6 gigajoules)."  Which is, I have to admit, a crapload of energy.  When the conspiracy nuts read this, they ignored everything but "RELEASED ENERGY IMPACT DETONATING," which of course led them to believe that NASA was shooting nuclear weapons at the Moon.

The writer goes on to explain:


According to many ufologists,-and alleged images which show ‘alien’ structures on the surface of the moon- NASAs LCROSS mission had a more militaristic objective rather than scientific.  Many believe that the 2-ton weapon that was detonated on the Moon’s South Pole was aimed at an Alien Base located there.

Righty-o.  A "militaristic objective."  Because NASA can't be telling the truth, obviously.  They never tell the truth.


This “bombed” moon base might perhaps explain why we haven’t been there in recent years, why would we avoid the Moon so much?  We know that it is a place filled with minerals, it has water (and they really needed to bomb it to find out?) and it would make a perfect outpost for anyone who wants to continue the exploration of our solar system and it would also help us get to Mars and beyond.

No, the reason we haven't been to the Moon -- much less, "Mars and beyond" -- is because the nimrods in Congress have cut NASA's budget to the point that it's a wonder they can afford toilet paper.  Hell, we can't even see fit to provide funding for NASA to study the climate, and that's a little more pressing problem at the moment than alien bases on the Moon.

But of course, no claim like this would be complete without a picture: 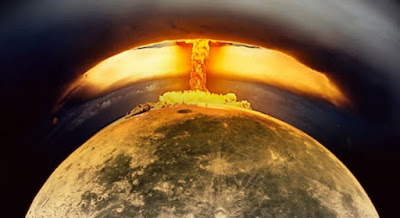 Nowhere in the article does it say that this is an "artist's conception," so the unwary reader -- which I suspect are the majority of the readers of Earth We Are One -- might think this is a real photograph.  But if it were, you'd think some of us here on Earth would have noticed it happening, don't you think?

On the other hand, those NASA folks are a wily bunch.  I wouldn't put it past them to point away from the Moon and shout "Look over there!" really loudly at the exact moment the nuclear bomb went off.  That's how sneaky they are.

Anyhow.  I think we can be pretty confident that LCROSS is exactly what NASA tells us it is -- a device for analyzing the composition of the Moon's surface.  There is no evidence of aliens on the Moon, which would make it kind of silly for NASA to waste their money sending bombs to kill them.  So I think we need to spend our time on more critical issues, such as how we have ended up with a presidential frontrunner who apparently doesn't know the difference between 9/11 and 7/11.
Posted by Gordon Bonnet at 1:59 AM