A win for sanity

Earlier this year, I did a post lamenting the fact that a woman who is apparently insane was running for a position on the Texas State Board of Education, and (at the time of the post) had the support of 50% of the voters polled.

Her name is Mary Lou Bruner, and she gives every evidence of being a few fries short of a Happy Meal.  She claimed that President Obama was addicted to drugs and financed his college tuition by being a male prostitute.  She blamed the JFK assassination on the Bad Guys "not wanting a conservative president."  She thinks the dinosaurs went extinct because there wasn't enough vegetation for them to eat after the biblical Great Flood.  She said that climate change was dreamed up by Karl Marx.  She thinks that Obamacare is going to mandate forced euthanasia of the unfit.

Last but not least, she said that school shootings are caused by the teaching of evolution.

For the record, I'm not making any of this up, and the actual quotes (should you wish to risk injury from repeated headdesks) are in my original post.  And despite her evidently having a screw loose, she had serious support amongst the voters in Texas.  Unsurprising, given that this is the same state that approved history textbooks that had passages claiming that the Africans brought over in the 17th, 18th, and 19th centuries weren't slaves, they were "guest workers" who had been "brought in to work on agricultural plantations."

So I was feeling pretty pessimistic about the whole thing.  This is why it was with combined surprise and delight that I learned yesterday that Bruner was resoundingly defeated in the runoff election by Keven M. Ellis, the president of the Lufkin School District school board.

"The voters did their homework," Ellis said in his victory speech, which is a phrase I'd definitely like to hear more often.

A spokesperson for the Texas Freedom Network, which has been vociferous in their criticism of Bruner, was less circumspect.  "Texas escaped an education train wreck tonight." 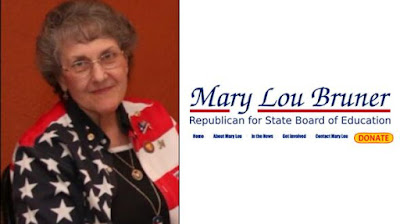 You have to admit, though, she looks mighty good wrapped in an American flag.

What I find interesting is that even Tea Party stalwart Grassroots America, which had backed Bruner initially, withdrew their support the week before the election.  Grassroots America has typically supported candidates who advocate for bringing religion into public schools, mandating the teaching of creationism and/or intelligent design, and excising any mention of climate change from science curricula.  But apparently, Bruner was too loony even for Grassroots America to support, and they quietly pulled their endorsement.  Spokesperson Jo Ann Fleming said that the move was made because of "inaccurate oral and written statements Ms. Bruner made in a meeting with superintendents."

Anyhow, the good news is that children in Texas have been issued a reprieve.  I was certain she was going to win, and I've never been so glad to be wrong.

Now, if only the voters will apply the same kind of careful consideration to the elections this November.
Posted by Gordon Bonnet at 4:01 AM