Drought of the imagination

The observation that politicians tend to lie is so obvious as to hardly need comment.  As far back as 2,400 years ago, Plato observed, "Those who are too smart and honest to engage in politics are punished by being governed by those who are stupid and dishonest."

It's disheartening how little has changed in two millennia.  We are still electing liars and crooks, which means that we ourselves are falling for the lies.  After all, we keep voting for them despite the fact that just about everyone knows full well that most politicians will say and do damn near anything to get elected.

Which brings me once again to Donald Trump.

I had told myself I wouldn't do another post on Trump, that I'd said what I had to say.  Honestly, I hate talking politics anyhow.  I'm pretty non-partisan in the sense that I don't vote any party line, and that I can support a wide range of candidates as long as they approach holding office from the position of respecting facts, being open-minded, and telling the truth.

Unfortunately, this narrows the field pretty severely right from the get-go.

But even from my admittedly cynical standpoint, Donald Trump raises dishonest bullshit to unprecedented heights.  He's not the stupidest person in politics; that dubious honor would go either to Democrat Sheila Jackson Lee of Texas (who asked if the Mars Pathfinder mission had seen the flag that Neil Armstrong had planted yet) or Republican Louie Gohmert, also of Texas (who said that cutting food stamps was a benefit to poor people because it would keep them from becoming obese).

Trump, however, may well be the biggest liar of the bunch.  And I don't think he lies because he's shooting from the hip; I think he lies with complete forethought and understanding of what he's saying and why.  He is a brilliant strategist -- and, I believe, entirely amoral.

Let's consider his statements last week to a rally in Fresno, California.  It's hard to give a political speech in California in the last couple of years without at least addressing the catastrophic drought they've been facing.  It's first and foremost on many people's minds, given the threat to drinking water and agriculture as the rivers run dry and the aquifers disappear.  And what did Trump say?  I'll give you the direct quote, because you won't believe me otherwise:

We’re going to solve your water problem. You have a water problem that is so insane. It is so ridiculous where they’re taking the water and shoving it out to sea.  They [the farmers] don’t understand — nobody understands it.  There is no drought.

If I win, believe me, we’re going to start opening up the water so that you can have your farmers survive.

I beg your pardon?  There is no drought?  All Trump had to do, all along, is wave his hand and say, "The drought does not exist," and it would just acquiesce and move on to trouble another nation, possibly Mexico, assuming it can cross the wall he's planning to build? 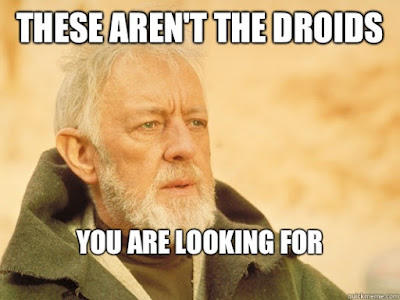 And all we have to do, apparently, is to elect Trump, and he will "open up the water."  Environment be damned.  The water will do what Donald commands.  Otherwise, it will be fired.

To a lot of Trump's naysayers, these are just gaffes, slips of the tongue, speaking without thinking things through first.  I think it's more insidious than that.  Trump knows full well what he's doing, what sort of message plays well with the crowds he's attracting.  He's well-loved among people who distrust science, disbelieve that the climate is changing because of human activities, and think that our leader should be able to bully nature into doing whatever he wants.

As such, he's wildly popular among the pro-fossil fuel contingent, and his talking points reflect that.  A couple of days ago, he promised that if he is elected, he would "cancel the Paris Climate Plan" that has made some motion toward addressing runaway fossil fuel use and anthropogenic carbon dioxide.   The move was no accident; it was calculated to win support (financial and otherwise) from the fossil fuel industry.  Don't believe me?  Consider his statement to a meeting of oil industry representatives in Bismarck, North Dakota three days ago:

Regulations that shut down hundreds of coal-fired power plants and block the construction of new ones — how stupid is that?... We’re going to deal with real environmental challenges, not the phony ones we’ve been hearing about.

Which reminds me of another quote, this one by George Bernard Shaw: "A government with the policy of robbing Peter to pay Paul can be assured of the support of Paul."

So it's no surprise that the petroleum industry loves the guy.  But what gets me most is the fact that Trump can lie outright to the crowds who attend his rallies, and they continue to cheer.  At least the other candidates are subtle about it; Trump, evidently, has the approach of "go big or go home:"

And you know I should say this, I’ve received many, many environmental rewards. You know, really.  Rewards and awards. I  have done really well environmentally and I’m all for it.  You know we want jobs.  We have to bring jobs back.  And if we can bring this part of the world water, that we have, that we have, but it’s true, I’ve gotten so many of the awards.

Do you know what "environmental rewards and awards" he's received?  I did some digging and I found...

... one.  In 2007, a golf course in Bedminster, New Jersey, owned by Trump, received an award for "environmental stewardship through golf course maintenance, construction, education and research."  And that's it.  One golf course, apparently, constitutes "many, many environmental rewards... so many of the awards."

So Trump keeps bullshitting, and the people keep cheering.  More ironic still, many of the same people loudly complain about the dishonesty of the government -- while this man stands in front of them, uttering outright lies, and none of them bat an eye.

The whole thing is profoundly discouraging, not least because I'm not particularly enamored of the other option I'm likely to be offered in November.  I hate being put in a position of voting not to support a good candidate, but in an attempt to prevent a horrible candidate from winning.  That, however, appears to be what I'm going to have to do.  Unless I can simply wave my hand, unleash my Jedi mind tricks, and say, "These are not the candidates you're looking for," and have the whole lot of them go away.
Posted by Gordon Bonnet at 2:28 AM