It's a theme that has cropped up over and over here at Skeptophilia; the fact that people spend a lot more time reacting from emotion than they do from rational thinking.

But the fact of its being familiar doesn't mean it's not maddening.  Which is why I responded to a recent paper that appeared in Perspectives on Psychological Science a couple of days ago with a wince and a facepalm.

Entitled "Evidence for Absolute Moral Opposition to Genetically Modified Food in the United States," and written by Sydney E. Scott and Paul Rozin of the University of Pennsylvania and Yoel Inbar of the University of Toronto, the paper had the following depressing conclusion:


Public opposition to genetic modification (GM) technology in the food domain is widespread (Frewer et al., 2013).  In a survey of U.S. residents representative of the population on gender, age, and income, 64% opposed GM, and 71% of GM opponents (45% of the entire sample) were “absolutely” opposed—that is, they agreed that GM should be prohibited no matter the risks and benefits.  “Absolutist” opponents were more disgust sensitive in general and more disgusted by the consumption of genetically modified food than were non-absolutist opponents or supporters.  Furthermore, disgust predicted support for legal restrictions on genetically modified foods, even after controlling for explicit risk–benefit assessments.  This research suggests that many opponents are evidence insensitive and will not be influenced by arguments about risks and benefits.

Catch that?  45% of the people surveyed think that GMOs should be illegal regardless of the risks or benefits.  In other words, regardless of the evidence.  Apparently, a little under half of the respondents could be presented with persuasive evidence that GMOs are risk-free and have proven benefits, and they still would be against them. 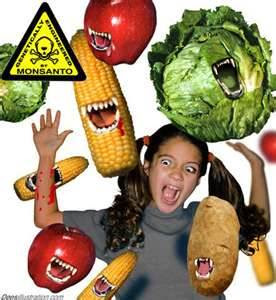 It's a discouraging finding.  There are a great many issues facing us today that drive an urgent need to make smart decisions.  We need to be making those decisions based on facts and logic, not on knee-jerk gut response and inflammatory rhetoric.  Climate change, policy on vaccines, regulation of alternative medicine, even the oversight of public education -- how can we do what's right if we're making decisions irrespective of the facts?

Of course, part of the problem is that even people with access to the facts often don't know the facts.  Witness the study released last week in the Journal of the Federation of American Societies for Experimental Biology that showed that 80% of respondents wanted to have laws mandating labeling identifying all foods that contain DNA.

Yes, you read that right.  Not genetically modified DNA; DNA, period.  To make it even worse, 33% of the respondents thought that non-genetically-modified tomatoes "did not contain genes," and 32% thought that "vegetables do not contain DNA."  As Katherine Mangu-Ward put it over at Reason.com, "When it comes to genetically modified food, people don't know much, they don't know what they don't know, and they sure as heck aren't letting that stop them from having strong opinions."

The problem is, the people who shriek the loudest tend to be the ones with the least comprehension of science.  Senator James Inhofe, who for some baffling reason is the chair of the Committee on Environment and Public Works, thinks that holding up a snowball disproves anthopogenic climate change.  The alt-med/anti-vaccine crowd still believe Andrew Wakefield's discredited study linking vaccinations to autism, despite overwhelming research demonstrating that there is no connection -- and anyone who argues otherwise is said to be "a shill for Big Pharma."  (Makes me wonder when my first Shill Check is going to arrive.  Soon, I hope.  I could use the money.)

Only rarely does anyone look at the evidence and say, "Oh.  Okay.  I guess I was wrong, then."  And the paper by Scott et al. seems to support the contention that if I'm waiting for this to happen, I better not be holding my breath.

Of course, along with resistance to change, another natural human inclination is the whole "Hope Springs Eternal" phenomenon.  So I'm not giving up on blogging, at least not any time soon.  Despite the rather dismal conclusion of the recent research, I'm still hopeful that we can make change, incrementally, by picking away wherever we can.
Posted by Gordon Bonnet at 2:08 AM