I'll see you on the dark side of the moon

When I first started writing here at Skeptophilia, back in October of 2010, one of the first people to show up in a post was one Richard C. Hoagland.

Hoagland is well known in woo-woo circles, especially anything having to do with aliens and conspiracies.  He apparently thinks that The X Files was a series of historical documentaries, and his idea of "evidence" is apparently "whatever stuff NASA comes up with that I don't understand."  Back in 2010 what brought him to my attention was his commentary on a mysterious hexagonal pattern that showed up on Saturn (it turned out to be patterns of turbulence that were replicable in the laboratory), and that Hoagland said was the result of "the same phenomenon that causes crop circles."

So it amused me no end to run across his name again, this time in an article in Inquisitr that claims that we finally have a smoking gun with regards to (what else?) aliens.  Not on Saturn, but closer to home, right up there on the Moon.  We have all of the features of an evil NASA coverup (and/or an episode of The X Files); a fired NASA database manager, allegations that Neil Armstrong himself had seen alien bases on the Moon, and a film clip of something moving in one of the craters on the far side. 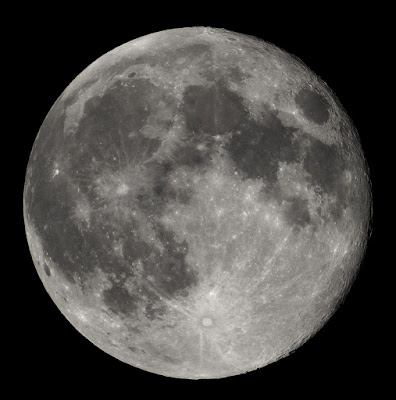 Now, I'm as excited about the possibility of intelligent extraterrestrial life as the next science nerd, but watching this film clip (which you should also do -- it's only a minute long) left me singularly unimpressed.  The narrator, however, waxes rhapsodic; he says "it may go down in the history books as one of the clearest indications that there is current -- mind you, current -- activity [on the Moon]."

Myself, I thought it looked like a video processing glitch.  All you see is a highly magnified, and thus blurry/pixillated, blob in the middle of the darkly-shadowed crater.   But the aliens and UFOs crowd don't seem to mind this; in fact, the worse the evidence, the grainier the data, the more they can write upon it whatever explanation they want.  Too much detail, and people will see that it's not what they're claiming it is.

So, grayish smudge = highly advanced alien base, apparently.  Over at Inquisitr, they certainly sound like that was enough for them:


Since then, more conspiracy theorists have investigated activity on the moon and many have found what looks to be alien cities.  The most recent coverage showing “something” emerging from a crater on the moon is surely making headlines...  Do you think this is proof that aliens exist and are living on the moon?  It certainly looks like something “living” is making itself known to the world.

I especially like the use of quotation marks around the word "living," given the fact that quotation marks are often used to indicate doubt.  It brings to mind a local restaurant that had the following dubious recommendation in an advertisement:

Which would be enough to discourage me.  I've had a few meals before that I've *air quotes* never forgotten, and it certainly hasn't made me want to repeat the experience.

So yes, Hoagland et al. are at it again, this time claiming that NASA has discovered alien life, and instead of doing what space science research agencies do (i.e. research interesting stuff), they've chosen to cover it all up.  Because that's how you get funding -- make sure that if you make cool discoveries, nobody ever finds out about it.

It's kind of discouraging, honestly, that I'm still fighting the same lunatics that I started out fighting six years ago.  You'd think that at least they could come up with a few new tropes.  I mean, the crop circles on Saturn thing at least was one I hadn't seen before.  The fact that we've returned to alien bases on the Moon just seems to indicate that the woo-woos aren't trying all that hard any more.
Posted by Gordon Bonnet at 2:02 AM