If there is one feature that is nearly universal to humans, it's curiosity.

I suffer from this myself.  When there's something I don't know -- even if it doesn't concern me -- I become kind of obsessed with finding it out.  It's not because I'm a gossip; in fact, I'm completely trustworthy with secrets (should you ever be tempted to tell me some salacious detail about yourself).  So even though I have no intention of ever doing anything with the knowledge, I still want to know.

Turns out, I'm not alone.  A study published last week in Psychological Science by Bowen Ruan and Christopher Hsee at the University of Chicago has shown that people are driven to find out things -- even when they know ahead of time that what they're trying to find out might well be unpleasant. 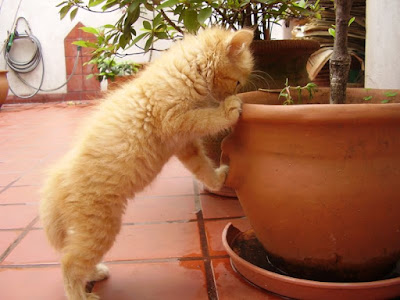 [image courtesy of photographer Julián Cantarelli and the Wikimedia Commons]

Ruan and Tsee set up a series of tests in which the outcome might be known to be pleasant (or at least neutral), known to be unpleasant, or could be either.  In one, they had a set of gag "electric pens" that deliver a painful shock when you press the button.  Test subjects were given either red pens (you know you'll get a shock from those), green pens (you know you won't be shocked), or yellow pens (you could either get a shock or not).  They then counted the number of times participants pressed the button.

They repeated the procedure, this time using digital recordings -- one of a pleasant sound (running water), another of an unpleasant one (nails on a chalkboard).  Once again, the people who didn't know which they were going to hear clicked the "play" button the most often.

And yet again -- this time with pleasant natural imagery (a butterfly) and an unpleasant one (a cockroach).  Same results.

Study author Ruan said, "Just as curiosity drove Pandora to open the box despite being warned of its pernicious contents, curiosity can lure humans–like you and me–to seek information with predictably ominous consequences... Curious people do not always perform consequentialist cost-benefit analyses and may be tempted to seek the missing information even when the outcome is expectedly harmful."

What is the most interesting about this study is that Ruan and Hsee asked the participants to rank whether they felt better, worse, or the same after the tests than before.  Across the board, the participants who were presented with uncertainty -- most of whom decided to test that uncertainty even at their own risk -- felt worse afterwards.

This is pretty curious.  We're driven to do things that could be dangerous (or at least unpleasant), and feel worse afterwards, and yet... we still do them.  It seems as if our "let's find out" attitude, so lauded in science as the wellspring of our drive to understand, might have a darker side.

So we might all be Pandora, doing what we do just to see what happens, and only regretting our decisions after the fact.  Curiosity doesn't necessarily kill the cat, at least not every time -- more often, it keeps us curious felines coming back for more.
Posted by Gordon Bonnet at 2:04 AM