A report is in from Fresno, California that there is a statue of the Virgin Mary in someone's house that is "weeping real tears."

The predictable result is that the devout are now flocking to the home of Maria Cardenas, and church officials are declaring that it's a miracle.  Devotees have spent hours kneeling and praying before the statue.  People are collecting the "tears" in vials, and claiming that they have magical powers of healing.  Cardenas states that the tears are "oily" and "smell like roses."

Such stories are not uncommon. There have been enough claims of this type that "Weeping Statues" has its own Wikipedia page.  Weeping statues, usually of Jesus or Mary, have been reported in hundreds of locations.  Sometimes these statues are weeping what appear to be tears.  Others weep scented oil, which is apparently what's happening in this case.  More rarely, the statues weep blood.

The problem is, of course, that when the church has allowed skeptics to investigate the phenomenon, all of them have turned out to be frauds. 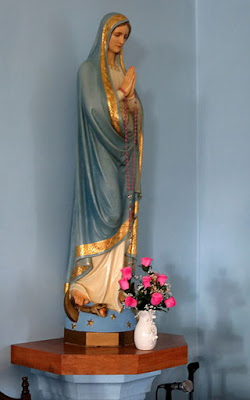 One of the easiest ways to fake a crying statue was explained, and later demonstrated, by Italian skeptic Luigi Garlaschelli.  If the statue is glazed hollow ceramic or plaster (which many of them are), all you have to do is to fill the internal cavity of the statue with water or oil, usually through a small hole drilled through the back of the head.  Then, you take a sharp knife and you nick the glaze at the corner of each eye.  The porous ceramic or plaster will absorb the liquid, which will then leak out at the only point it can -- the unglazed bit near the eyes.  When Garlaschelli demonstrated this, it created absolutely convincing tears.

What about the blood?  Well, in the cases where the statues have wept blood, most of them have been kept from the prying eyes of skeptics.  The church, however, is becoming a little more careful, ever since the case in 2008 in which a statue of Mary in Italy seemed to weep blood, and a bit of the blood was taken and DNA tested, and was found to match the blood of the church's custodian.  Public prosecutor Alessandro Mancini said the man was going to be tried for "high sacrilege" -- an interesting charge, and one which the custodian heatedly denies.  (I was unable to find out what the outcome of the trial was, if there was one.)

Besides the likelihood of fakery, there remains the simple question of why a deity (or saint) who is presumably capable of doing anything (s)he wants to do would choose this method to communicate with us.  It's the same objection I have to the people who claim that crop circles are Mother Earth attempting to talk to us; it's a mighty obscure communiqué.  Even if you buy that it's a message from heaven, what does the message mean?  If a statue of Mary cries, is she crying because we're sinful?  Because attendance at church is down?  Because we're destroying the environment?  (Pope Francis might actually subscribe to this view.)   Because the Saints didn't make it to the Superbowl this year?  Oh, for the days when god spoke to you, out loud, directly, and unequivocally, from a burning bush...

In any case, I'm skeptical, which I'm sure doesn't surprise anyone.  I suppose as religious experiences go, it's pretty harmless, and if it makes you happy to believe that Mary's tears will bring you good luck, then that's okay with me.  If you go to Fresno, however, take a close look and see if there's a tiny hole drilled in the back of the statue's head -- which still seems to me to be the likeliest explanation.
Posted by Gordon Bonnet at 1:53 AM