News from the fringe

It's getting to the point that I'm not entirely sure whether the hyperreligious types here in the United States might be engaging in an elaborate act of self-parody.

I mean, is it just me, or have their claims been getting more and more ridiculous?  As I was casting about yesterday for a topic for today's post, I ran across not one, nor two, but three stories that made me say, "Okay, be honest.  You people aren't serious, right?"

First, we had the Jehovah's Witnesses releasing a creepy cartoon aimed at children, trying to convince them that if they have friends with LGBT parents, it's their duty to make sure that the friends find out that their parents are sinners who are doomed to hell.

The cartoon features a little girl who comes to her mom, dismayed because she has a friend whose parents are lesbians.  The mom explains that this is problematic:


People have their own ideas about what is right and wrong – but what matters is how Jehovah feels.  He wants us to be happy and he knows how we can be happiest.  That’s why he invented marriage the way he did -- between one man and one woman.

Jehovah created Adam and Eve, male and female. Then he said a man will stick to his wife… Jesus said the same thing.

What a brilliant analogy!  Who you are attracted to is exactly like someone trying to bring a hand grenade onto an airplane.  Do go on, Creepy Cartoon Mom:

It’s the same with Jehovah! He wants us to be his friend, and live in paradise forever, but we have to follow his standards to get there.  To get there we have to leave some things behind – that means anything Jehovah doesn’t approve of...  People can change, that’s why we share his message.

Creepy Cartoon Girl then says she'll make sure to tell her friend's parents that Jehovah doesn't approve of their lifestyle, a development that Creepy Cartoon Mom pronounces "awesome."

Then we had a fundamentalist pastor in Tennessee who said that scientists are "abandoning Darwin" in favor of ghosts and UFOs, which (given that they live in the sky, sort of) are basically god.  As long as you squint your eyes and look at them really carefully.

In fact, Pastor Charles Lawson of the Temple Baptist Church of Knoxville has a great deal to say on the topic, following the general scheme of "if you're making up random shit, make up a lot of it":


Think about what I’m saying about aliens communicating with you. Aliens from above.  Something coming down from the skies and communicating with us here on this earth. A lot of scientists, a lot of them, and there’s really no way to know specifically because of political correctness and the pressure that’s put upon them.  A lot of scientists have abandoned Darwin, but because of fear of losing their jobs, fear of losing the ability to produce papers, uh, fear, peer pressure, they have to keep it in, and they don’t come out with it, but here and there some do.  They have abandoned Darwin.  They have abandoned evolution.

Yes, there's "no way to know specifically" because it's bullshit.  But that doesn't stop him for a moment:


Scientists have jettisoned Darwin and now they’re looking up, and past, and they’re getting into the spirit world, into the paranormal world.  And the two of them, they compliment each other, and they begin to get into something that their scientific books know nothing about...  You can get a Ph.D. from Harvard and not know one thing about a spirit.

And once again, there's a reason for that, but probably not the one Pastor Lawson is thinking of.

Finally, we have Mayor Tony Yarber of Jackson, Mississippi, who is recommending taking care of the abysmal conditions of roads in the city by... praying that the potholes will get filled.  Yarber tweeted:


Yes….I believe we can pray potholes away.  Moses prayed and a sea opened up. #iseeya #itrustHim #prayerworks

Some of the residents of Jackson were less than sanguine about the idea.  Glenn Garber responded:


Are you fucking kidding me?!  I have a better idea… Pay to have them filled!

Yarber responded, apparently in all seriousness:


We tried that.  So praying is the obvious alternative.

When days went by and lo, the potholes were not magically filled, one Jackson resident posted some doubts:


I thought he was going to pray for them to be fixed.  Did God deny his prayer?

Because evidently one of the mysterious ways in which god works is through filing road maintenance plans with the city council.

Is it just me, or is god relying more on bureaucracy now than he did back in the good old create-loaves-and-fishes days?  When the multitudes came to Jesus to be fed, he didn't say, "And I hath filed a requisition with the Greater Judea Food Distribution Network, and thy loaves and fishes will be delivered three weeks from next Thursday, as hath been prophesied in the scriptures." 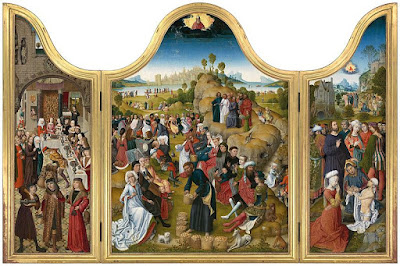 So anyhow.  I'd like to think that these people aren't serious, but I'm very much afraid that they are.  Worse still, there is a good percentage of folks in the United States who read this kind of thing and say, "Hallelujah!" instead of doing what I did, which is guffawing.  I live in hope, however, that the more outrageous the claims from the fringe get, the more people will stop and say, "Okay, wait a moment.  That can't be true."

Or maybe not.  After all, this is the country where a majority of the citizens say that climate change is a "myth" while simultaneously believing that people do bad stuff because a woman created from a rib was given an apple by a talking snake.
Posted by Gordon Bonnet at 1:53 AM