I ran into two stories yesterday that were interesting primarily in juxtaposition.

In the first one, we hear that evangelical minister Franklin Graham thinks that all school boards need to be run by (surprise!) evangelical Christians.

In an interview with Fox News's Todd Starnes, Graham said:


I want Christians running the school boards.  I want the school boards of America in the hands of evangelical Christians within the next four to six years.  And it can happen and that will have a huge impact because so many school districts now are controlled by wicked, evil people, and the gays and lesbians, and I keep bringing their name up, but they are at the forefront of this attack against Christianity in America.

Implying, of course, that the "implosion of the morality in the United States" (Graham's words) comes, in part, from evil amoral secular people running the schools, and indoctrinating young people's minds in concepts like tolerance and keeping your damned nose out of what other people do in the privacy of their own bedrooms. 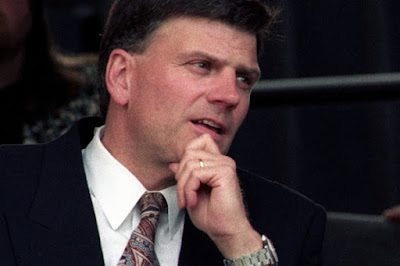 But what places this into even starker relief is another story that appeared over at Patheos yesterday.  In this bit of news, we hear about an upcoming evangelical conference in Wichita, Kansas, sponsored by the Christian patriarchy movement Quiverfull, which is devoted to the topic of how parents can arrange marriages between their teenage children.

If this sounds too ridiculous to be real, here are direct quotes from Quiverfull's FAQ page:

We believe that Scripture teaches quite clearly that the father does have the power to choose a spouse for their virgin child; and we see this in several Scriptural examples.

But isn't this a forced marriage?  Amazingly enough, in their minds apparently it isn't:


Emphatically, an “arranged marriage” (fathers binding their children in the covenant of betrothal) is NOT synonymous with “a forced marriage”, and sadly, secular sources are often more honest in this matter to recognize this clear distinction than other Christians are.  Unfortunately, this idea is far too common in our modern notions, and far too often we are accused of promoting this, either explicitly or implicitly.  When the “liberty” that moderns value (especially Americans) is contrasted with the type of authority and submissiveness that the Bible teaches and demonstrates, it is challenging to us, and this sharp contrast often leads people to jump to the idea of “forced” compliance.  It is difficult for the modern (again, especially Americanized cultures) to come to grips with the idea of willful, joyful submission.

So young ladies, submit to what we're ordering you to do joyfully, and it won't have to be "forced."

Anyway, how young are we talking about, here?


The ‘youth’ ready for marriage has breasts. A woman who is to be married is one who has breasts; breasts which signal her readiness for marriage, and breasts who promise enjoyment for her husband.  (We believe that ‘breasts’ here stand as a symbol for all forms of full secondary sexual characteristics.)

Lest you think that these people aren't really doing the whole "biblical marriage" thing, here -- yes, they are even requiring that parents of boys pay a "bride price" to the parents of the girl:


A “bride price” is anything paid or given by the man or his representative at the time of his betrothal or receiving his bride.

Scripture certainly teaches about it… The law concerning bride price (Exodus 22:16-17)
indicates that . . . the bride price was a normal part of the marriage process.

The bride price plays a significant function: It shows the woman’s value, and the point isn’t that the father gets the money but that he keeps it for his daughter, if her husband should ever abandon her.

And if that's not twisted enough for you, they also go on and on about "The continuing authority of the father over the couple after marriage."

What struck me after reading all this (once I recovered from my nausea) is, "these are the sort of people Franklin Graham wants running our school boards."  In other words, the people he wants to be in charge of protecting the interest of America's youth.  The people into whose trust we should place the well-being of our children.

Who unfortunately are also the people who believe that Deuteronomy 21:18-21 should be followed to the letter:


If a man has a stubborn and rebellious son who will not obey the voice of his father or the voice of his mother, and, though they discipline him, will not listen to them, then his father and his mother shall take hold of him and bring him out to the elders of his city at the gate of the place where he lives, and they shall say to the elders of his city, ‘This our son is stubborn and rebellious; he will not obey our voice; he is a glutton and a drunkard.’  Then all the men of the city shall stone him to death with stones. So you shall purge the evil from your midst, and all Israel shall hear, and fear.

And, ironically, who the same people who are having a complete meltdown worrying about how children might be damaged by a transgendered person looking for a quiet place to pee.

So as far as agendas go, I'll take the LGBT agenda over this fuckery any day.  As far as I can tell, the LGBT agenda mostly is about making sure that people aren't discriminated against by bigots.  The evangelical agenda seems more to do with turning the United States into an Iranian-style bloodthirsty theocracy run on rules set down by a bunch of illiterate Bronze-Age sheepherders who thought god's first priority was making sure that damn near every natural human impulse was punishable by death.

And I know which one I'd want my own children living in.
Posted by Gordon Bonnet at 3:45 AM