Signs of the times

I'll be right up front with you.  I have no idea what to do about the problem of immigration, illegal and otherwise.  In my admittedly rather apolitical brain, this whole issue seems so intractably complicated as to admit no reasonable solution at all.

Do I feel sorry for the immigrants, most of whom are coming from corrupt countries with horrific standards of living, with no access to medical care, decent housing, clean food and water, and education for their children?  Of course I do.  In their place, I'd almost certainly be trying to get out, too, whatever the risk or the cost.  However, I also recognize that illegal immigration is... well, illegal.  And if it's against the law, we should either enforce it or else change it.

I also sympathize with the concerns of a birdwatcher/naturalist friend of mine who lives in Sierra Vista, Arizona, only fifteen miles from the Mexican border, who says, "We're being overrun.  This used to be a safe community, but the people trucking the illegals across the border are criminals, pure and simple.  Many of them run drugs and guns along with their human traffic.  I love this place, but not a day goes by that I don't think of getting out, moving further north."

I understand as well the concerns of people who see their culture changing more in a decade than it had in the preceding two hundred years.  This is especially striking in western Europe, where the influx of Muslims has led to some areas coming under something very close to Shari'a law -- people drinking alcohol, women dressed "immodestly," couples displaying affection, anyone showing signs of being homosexual have been harassed, and in some cases, assaulted.

Yes, I know that those incidents aren't as common as the media coverage would lead you to believe, and that for every clash there are thousands of white Europeans and Muslims living side by side in peace.  All I'm saying is that I can see where the fear comes from.

Unfortunately, we humans have a bad tendency, which is to pretend that impossibly complex problems have easy solutions.  "Build a wall."  "Deport 'em all."  "Seal the borders."  And as tempers get high, the rhetoric on both sides becomes increasingly vitriolic -- to the point that desperation sets in, and people are willing to lie to hammer their point home.

The whole thing comes up because of some photographs of street signs in England that have been making the rounds of social media in the last few weeks.  I've seen three so far: 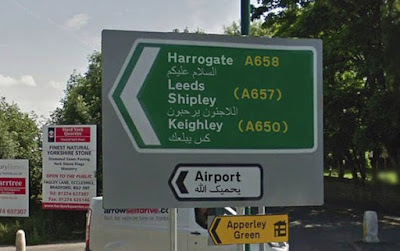 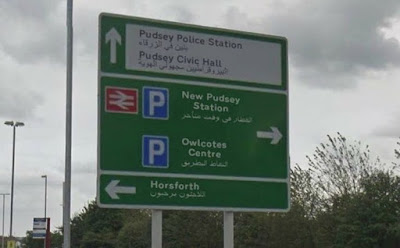 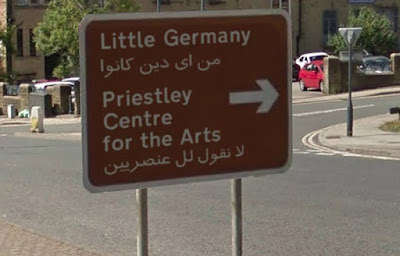 The photos are usually accompanied by a hysterical caption to the effect that them Mooslims are infiltrating everything, to the point that even the street signs have to be captioned in Arabic.  And because the idea here is to engage the emotions and disengage the brain, the response has been uniformly horrifying, condemning the government officials who agreed to the sign change, railing against the immigrants who pushed for its necessity.

The problem is (well, one of the problems is) that the signs are photoshopped.  Put more bluntly, the claim is a bald-faced lie.  How do I know?  Well, a couple of reasons.  First, the Arabic script below the signs doesn't spell out the names of the towns; it's pretty clear that whoever Photoshopped these simply grabbed whatever Arabic text they could find and spliced it in.

In fact, not only does the Arabic below "Harrogate" not say "Harrogate," it says "salaam alaikum."  Which, you have to admit, would be an odd thing to put on a street sign.

Some of the people who have been forwarding the photographs around have further muddied the waters by claiming that the script is Urdu, presumably to stir up sentiment against Pakistanis.  It's not Urdu, it is (as I mentioned earlier) Arabic.  Not that facts seem to matter much, here.

Most damning of all, the photos themselves are simply downloads from Google Street View, and in the originals, the signs have no Arabic subtitles.  Take a look, for example, at the original of the top photograph:

This is clearly the same photograph -- the intrepid Photoshopper simply cropped it and spliced in the Arabic text.  In fact, if you look closely, you'll see that even the clouds are in exactly the same position in the two photographs.

What appalls me most about this is not that some hate-mongering bigot lied.  Hate-mongering bigots tend to do that, after all.  What appalls me most is how easily people fell for it.  We have become so terrified of The Other that when presented with further evidence of a takeover, we don't even stop to consider whether it makes any sense.  We swallow what we're given, and it further bolsters the fear, further squelches the rationality.

It'd be nice if we had answers, if these horrible problems our world is facing did have simple solutions.  The harsh fact, however, is that if they have solutions at all, they will be ones that are costly and require sacrifices.  But one thing I am certain of: your position is never strengthened by lying.  And to the people who are circulating these photographs, just stop.  What you're doing is making an already awful situation worse.
Posted by Gordon Bonnet at 2:03 AM