I have a simple request.  Can we stop electing morons to public office?

As you might expect, this comment arises because of Louie Gohmert, the Texas representative who has been elected to five consecutive terms despite having only recently mastered the ability to walk without dragging his knuckles on the ground.

Gohmert, you might recall, is the one who said the military's function is to "kick rears, break things, and come home."  He's also the one who took a highly humiliating trip to Egypt (humiliating to the rest of America, although probably not to him, given that you have to have an IQ that exceeds your hat size in order to experience humiliation), in which he and Michele Bachmann made a highly condescending speech in which, amongst other things, they implied that the Muslim Brotherhood in Egypt was responsible for 9/11. 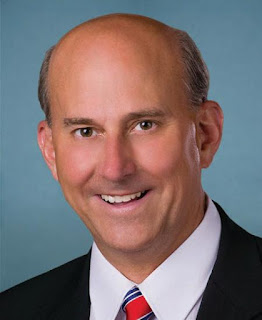 Now, Gohmert has beat all previous stupidity records by throwing sexism into the mix.  He was one of four representatives who voted against a bill authorizing the National Science Foundation to utilize funds to recruit women into scientific fields.  When asked why he had voted against the measure, here was his response:

It just seems that, if we are ever going to get to the dream of Martin Luther King, Jr., that he spoke just down the Mall, he wanted people to be judged by the content of their character and not by the color of their skin.  I know after race has been an issue that needed attention, then gender appropriately got attention.

But the point is that those things are not supposed to matter.

It just seems like, when we come in and we say that it is important that for a while we discriminate, we end up getting behind.  And then probably 25 years from now boys are going to have fallen behind in numbers, and then we are going to need to come in and say: Actually, when we passed that bill forcing encouragement of girls and not encouraging of little boys, we were getting behind the eight ball.  We didn’t see that we were going to be leaving little boys in the ditch, and now we need to start doing programs to encourage little boys.

So here is a person who is so steeped in white male privilege that he honestly doesn't get the toll that has been taken on women and minorities by systematic institutional prejudice.  One and all, the people who cry "overreach of political correctness" are themselves privileged -- and don't know what it's like to deal with, every single hour of every single day, others denying you access based on your gender, ethnicity, or sexual orientation.  They do not understand what it's like to have doors closed to you because of factors that you can't change (and in a fair society, wouldn't want to).

Yes, I know, I'm a heterosexual privileged white male myself.  The difference is that I know I don't know these things.  I'm not blowing hot air pretending that I have any perspective at all.

Gohmert, on the other hand, doesn't seem to be smart enough to recognize his ignorance.  In fact, he went on to say that it's a good thing that such a program didn't exist in Marie Curie's time:


I thank God that there wasn’t a program like this that distracted her.  But according to the bill that we passed today, we are requiring the Science Foundation to encourage entrepreneurial programs to recruit and support women to extend their focus beyond the laboratory and into the commercial world.  Thank God that is not what Madame Curie did.

If you have any doubt about how the brilliant minds of women like Marie Curie, Hilde Mangold, Annie Jump Cannon, Henrietta Swan Leavitt, Barbara McClintock, and Rosalind Franklin would have benefited from a program like this, read about their lives, and the struggles that they faced simply having anyone in the field take them seriously.  Consider how much more they could have accomplished if the majority of their time hadn't been spent in proving that their credibility, competence, and intelligence had nothing to do with which sex organs they born with.

Gohmert's comments are a profound insult to women everywhere, and to their allies who at least partly understand how sexism still permeates our culture.  Unfortunately, though, I suspect that if such ugly willful ignorance hasn't caused him to lose the election the last five times, it probably won't make any difference in the next one.

Still, one can keep hoping.
Posted by Gordon Bonnet at 2:00 AM