The politics of rage

So Donald Trump is going to be the Republican nominee for president.

I got in an argument with a couple of friends last year when Trump first began to ramp up his campaign.  "Never going to happen," I was told.  Trump will fizzle out.  People will realize what a clown he is, and he'll go down in flames.  Or, maybe, Trump isn't really serious, he's playing a great big practical joke on America and at some point will shout "Ha ha, fooled ya!" and drop out.

My response then was that I wished I could believe that.  Trump, I said, has been serious from the beginning.  He's a power-hungry megalomaniac who looks at the presidency as another thing his money and influence can buy, another notch on his gun, another trophy on his wall.  Once he sets his sights on something, he doesn't give up until either he's attained it or been denied.  No way will he concede or (worse) drop out.

Never have I been so sorry to be right.

My fear all along has been that Trump would be able to go the distance because he is tapping in on something deeply interwoven into the psyche of America -- the idea that we are threatened, that anyone different from us is dangerous, that if we're poor all it means is that we are (in Ronald Wright's trenchant words) "temporarily embarrassed millionaires."  And, furthermore, that there's a simple solution to all of it.  Build a wall.  Deport all Muslims.  Cut taxes.  Get Obama out of the White House.  Nuke ISIS.  Stop trading with China.  Keep jobs on US soil.

So Trump has appealed to a group of people who share a dangerous combination of traits: a lack of understanding of the complexity of the world, and a deep-seated, visceral anger that the face of the United States is changing.

The result is that we have a nominee who has not only said, but been applauded for saying, the following:

Each time, people like me have had a thought of, "Okay, that's it.  That's got to wake people up, get them to see who they're supporting for what he actually is -- a narcissistic, arrogant blowhard whose ideal of government is closer to a fascist dictatorship than it is to a democracy."  Instead, each time he's seen a spike in the polls, and comments like "He speaks his mind" and "He's saying what people are thinking."

I'm going to propose something radical -- that our president should be appealing to our highest ideals, not making utterances that sound like things my uncle said after his fourth can of Bud Lite.  (S)he should have a far better understanding of world policy than your average person does.  (S)he should help us to see reality, not reinforce the ugliest and most divisive of our preconceived notions.

But that hasn't happened here.  I keep being told by my optimistic friends that Trump may have won the nomination, but there's no way he can win the presidency.  That a match-up with either Clinton or Sanders, whichever wins the Democratic nomination, will result in a for-sure Democratic win.

I wish I believed that.  We've been hearing the same thing over and over during the last year, from Republicans and Democrats alike -- that the Trump candidacy was doomed.  Each time, the prognosticators have been blown back with surprise when he's surmounted challenge after challenge, seen nothing but growth in his support.

And now, a substantial fraction of Americans on both sides of the political aisle are looking at the election and thinking, "How in the hell did we get here?"  And lest you think that I'm exaggerating about the panic Trump is inducing in both parties, witness the op-ed piece written by David Ross Meyers, conservative writer and former staffer for George W. Bush, published yesterday over at Fox News Online.  In his scathing take-down of Trump's candidacy, he writes:


To begin with, Mr. Trump has autocratic tendencies, and openly admires tyrants such as Vladimir Putin.  In fact, his narcissism and cult of personality leadership style seem better suited to countries like North Korea and Uzbekistan than America.  Trump has repeatedly attacked core conservative principles such as freedom of speech, freedom of religion, and American leadership on the world stage.  He has incited the use of violence against his detractors, called on America to commit war crimes, and suggested the possibility of civil unrest if he is denied the GOP nomination.

Mr. Trump proclaims that he’s going to make America great again, but can’t provide any realistic plans for doing so; instead, he frequently resorts to scapegoating outsiders, foreigners, and minorities.  The few policies that Trump has articulated would make America less safe, trample upon our most fundamental rights, and appeal to the basest instincts of the American people.

The simple explanation for how Trump has gotten this far is that political commentators like Rush Limbaugh and Ann Coulter have for decades encouraged the politics of rage, fanned the fires of divisiveness and anger.  We should not be surprised that the result is a candidate who has ridden to the nomination on the heat of those flames. 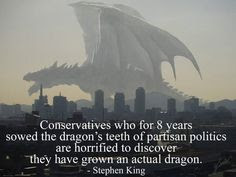 But like many simple answers, it's probably not entirely correct.  The divisiveness and anger were already there -- else the hateful commentary from Limbaugh, Coulter, et al. would never have resonated as it did.  And in a lot of ways, people are right to be angry; years of skewed governmental policies have favored corporate profit over the needs and struggles of ordinary citizens, have fostered job loss and outsourcing and the defunding of public education and environmental degradation, irrespective of the cost to the citizenry.

So I do get where this sentiment, at least in part, comes from.  But what I know is that Trump is not the answer.  I mostly stay out of politics, so for someone like me to feel this strongly about a political race is unusual.  We can't let Trump win.  A man like him in an ordinary job is at worst a boor, a lout, a loudmouth, a grandstanding demagogue.

Running a country, he could be a Mussolini, a Hitler, a Kim Jong-Un, an Idi Amin.  Impossible?  No way would he wield that kind of power, even if he won?

This man has beaten all of the odds, confounded every single naysayer from the beginning.  Don't tell me what he can and can't do.

Focus on making sure he's defeated.
Posted by Gordon Bonnet at 1:58 AM