The price of silence

I'm going to make a bold statement here: in any modern society, the single most critical thing for fostering intellectual advancement is freedom of speech.  Nothing else -- whether the country is run by liberals or conservatives, whether it is predominantly religious or secular, whether it's a democracy or monarchy or some other form of government -- really matters.

Freedom of speech also trumps considerations of politeness and offense.  I'm all for being compassionate and kind, and think that "don't be a dick" is a pretty good starting point for morality.  That said, it is more important that you be allowed to say what you think than it is for me to be happy about it.

It's like the Charlie Hebdo massacre.  My general opinion was that as satire goes, Charlie Hebdo was juvenile and not particularly funny.  Their crude lampooning of... well, everything... didn't even reach Mad magazine standards for humor.  But you know what?  That is entirely irrelevant.  The fact that I, or anyone else, might be offended by what they publish leaves us the easy option of not reading it.

[Nota bene:  I'm not considering true hate speech, here -- when someone makes credible material threats against someone else based on ethnic origin, nationality, sexual orientation, or religion.  But I think the distinction is clear enough that the point hardly needed to be made.]

The whole topic comes up because of the deaths in the past months of eight Bangladeshi bloggers, journalists, and writers, hacked to death with machetes because they had, in the minds of conservative Muslims, "insulted Islam."  The government has been reluctant to pursue the attackers, because this puts them in the awkward position of supporting people who are being critical of the state religion -- or who are simply outspoken atheists. 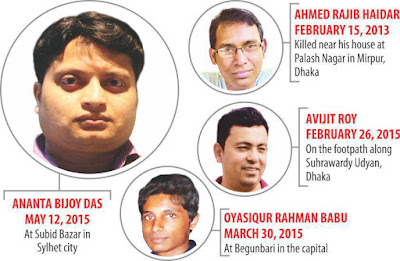 It would be unsurprising if this had the effect of silencing the remaining secular writers in the country.  Who could blame people for going into hiding if there's a very real danger that they'll be butchered if they keep speaking out?  Amazingly, there are three bloggers who have refused to be intimidated.  They were asked to make a statement to CNN, and offered the possibility of anonymity.

All three gave statements, and refused to do so anonymously.

Their statements are profiles in courage.  I want you to go back and read the original post (linked above), but the words they wrote are so inspiring, and so germane to what I discuss here on a daily basis, that I have to excerpt them.

From Imran H. Sarker, founder of the Bangladeshi Bloggers and Online Activist Network:

With the killing of one blogger after another, we seem to be heading towards total oblivion. As the world progresses under the banner of freedom of expression, we seem to be hurtling backwards. Our freedom is being silenced by the serial murder of bloggers and publishers.

From Maruf Rosul, writer for the Mukto-Mona human rights blog:


Freedom of expression in my country is dying...   Right now, our beloved Bangladesh is bleeding ceaselessly.  The land is torn asunder by the fanatics.  There is no way to disagree with the establishment or to ask questions about anything, even though freedom of speech is our constitutional right.


As they continue to tally their votes in order to hold power and influence, our mainstream politicians are the ones who are creating the debacles our country is currently facing right now. It is they who are silently broadening the path for radicalized murderers and extremists.

It's very easy, over here in the United States, to feel nothing but helpless rage at the murderers who are trying to squelch free speech.  What can we do, other than stand by and watch as secular writers are intimidated, injured, or killed?

First, visit their websites (linked above).  Show them support.  If it's possible, contribute financially.  The extremists' goal is not only directly to harm secular bloggers, but to fragment and intimidate their allies.  These people are continuing to speak out, at the risk of their lives, in order to maintain the standard of free speech that is the hallmark of civilized society.

On a personal note, as a blogger who often writes on controversial topics, I can't imagine being in that situation myself.  Would I have the courage to do what Sarker, Rosul, and Jebtik are doing, knowing that I could be ambushed and murdered in the street simply for voicing my opinion?  I don't know.  I'd like to think I would, but am profoundly grateful that I don't have to live with that threat.  However, one thing is certain: there is nothing to be gained by silence.  The price of silence is the loss of one of the most important freedoms we have.  If the extremists stop the dissenting voices, they will truly have won.
Posted by Gordon Bonnet at 1:50 AM