Thoughts on a drive-by

Note to the guy who roared past me this afternoon as I was out on a run, yelled, "Faggot!  Put a shirt on!", and threw a half-full can of soda at my head:

First, about the epithet.  That's a word that has been hurled at me many times before, starting with the cretins in the locker room in eighth grade, despite their having no information whatsoever about my sexual orientation.  Not that they cared, I suspect.  The mere fact of my being tall and thin, and caring more about playing music and writing stories than I did about football, made me suspect in their eyes.  I was called that, and equivalent words, with clock-like regularity throughout high school and even into college, by people who evidently thought their mission was to make others' lives as powerless and miserable as possible.

I didn't defend myself against the claim then, and I'm not going to do it now.  Back in my public school days, arguing the point would have simply brought more negative attention my way, not to mention being futile.  Now, however, my reasoning is different.  If the gentleman in the jacked-up pickup truck had stopped to discuss the matter with me, I would have just shrugged my shoulders and said, "Why does my sexual orientation make a difference to you?"  I'm not going to defend myself against an accusation that isn't shameful either way.  I'm publicly out as bisexual, but if you want to call me gay, have at it.

Second, I run shirtless when the weather's warm because I like to.  Why that is a problem I have no idea.  One of the simple pleasures of our short summer here in upstate New York is the feel of the sun and wind on my skin, and I'll be damned if I'll forgo that because you think I'm too old, too skinny, or too whatever.  At 55, I finally have reached a point where I'm not ashamed of the body I was gifted by my genetics, and I'm not going to let the snarling of a neanderthal whose IQ matches his hat size shove me back down into self-loathing.  Spent too long there already, and never intend to go back, thanks. 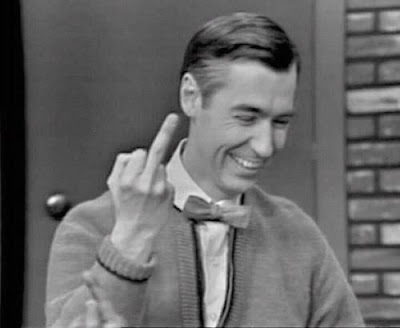 Somehow, I think Mr. Rogers would be on my side in this matter.

The upshot of it all is actually kind of empowering; the startling discovery that you, and people like you, can't hurt me any more.  I have no need of your approval.  I don't care if you think I'm ugly, skinny, gay, or all of the above.  I wish I'd realized all this forty years ago, but we all move at our own pace.

And in the end, all you did is to put a damper on a single afternoon's run.  Tomorrow morning, I'll wake up and I'll be fine.  I'm still going to run, still going to shed the shirt when I feel like it, and still enjoy being outdoors in the sunshine.

You, on the other hand, will wake up tomorrow morning, and still be an asshole.  So on the whole, I believe this means that you lose. 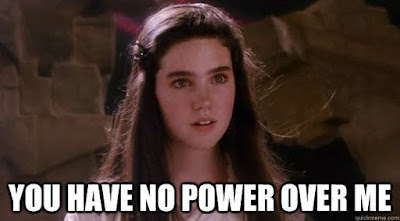 So would David Bowie.

Oh, and finally: your aim sucks.  You missed me with the soda can by about fifteen feet.  I picked up the can, and I'm going to return it to the redemption center and get your five cents' deposit.  Have a nice day.
Posted by Gordon Bonnet at 1:57 AM