Advice from the ignorant

I have never been a police officer.  No one in my family is a police officer.  I have not studied criminal justice; most of what I know about the legal system has been gleaned from television shows like Law & Order, which, to be honest, I have watched less than a dozen times total.  I've only visited a police station a handful of times, and each time spent less than a half-hour there.

Now stand by while I tell you everything that is wrong with our justice system, and furthermore, how to fix it.

Did you wince a little?  I hope so.  But this election season has been rife with ignorant self-proclaimed experts who know exactly what to do about everything despite having neither the experience nor the facts to base their opinion on.  And for a sterling example of this, let's look at the speech given by Donald Trump, Jr., two days ago on the final night of the Republican National Convention.

Trump Jr. spent a lot of his time railing against the public school system, despite the fact that he (1) is neither a teacher nor an administrator, (2) has never studied educational policy, and (3) for fuck's sake, didn't even attend a public school.  Nevertheless, here's what he said about our national educational policy, with a few interjected comments from me:


The other party gave us public schools that far too often fail our students, especially those who have no options.

Which party is it, exactly, that has across the nation gutted the public school system by cutting funding to the bone, resulting in loss of teachers, curriculum, and services?   To take just one of many examples, consider Republican Governor Sam Brownback of Kansas, who just this year signed legislation that would allow parents to divert 70% of the tax money earmarked for education into religious schools -- and this after he already cut $45 million in funding for public schools in 2015.


Growing up, my siblings and I we were truly fortunate to have choices and options that others don’t have.  We want all Americans to have those same opportunities.

You want every American child to attend a well-funded private school?  Paid for how, exactly?


Our schools used to be an elevator to the middle class. Now they’re stalled on the ground floor.  They’re like Soviet-era department stores that are run for the benefit of the clerks and not the customers, for the teachers and the administrators and not the students.

Bullshit.  Spend any time at all inside a typical public school and you'll find out that's wrong in under five minutes.  In fact, I'll issue an open invitation to Trump Jr., or anyone else for that matter, to spend a day in my classroom this fall.  Let's see if afterwards you think that what happens there is done for my benefit, or for the benefit of the principal and superintendent.


You know why other countries do better on K through 12?  They let parents choose where to send their own children to school.

Is there a stronger word than bullshit?  Let's look at one example of a country often touted as achieving educational excellence: Finland.  Their success story -- student scores on standardized tests ranking 2nd in the world in science, 3rd in reading, and 6th in math, with a 93% high school graduation rate nationwide -- has zilch to do with "parental choice."  According to an article on the Finnish educational system by LynNell Hancock that appeared in Smithsonian:


There are no mandated standardized tests in Finland, apart from one exam at the end of students’ senior year in high school.  There are no rankings, no comparisons or competition between students, schools or regions.  Finland’s schools are publicly funded.  The people in the government agencies running them, from national officials to local authorities, are educators, not business people, military leaders or career politicians. Every school has the same national goals and draws from the same pool of university-trained educators.  The result is that a Finnish child has a good shot at getting the same quality education no matter whether he or she lives in a rural village or a university town.  The differences between weakest and strongest students are the smallest in the world, according to the most recent survey by the Organization for Economic Co-operation and Development (OECD).  “Equality is the most important word in Finnish education. All political parties on the right and left agree on this,” said Olli Luukkainen, president of Finland’s powerful teachers union.

But do go on, Mr. Trump Jr., as if you actually had the slightest idea what you're talking about:


That’s called competition. It’s called the free market. And it’s what the other party fears.

No, we don't fear competition, and contrary to what people like you would have the public believe, teachers like myself don't fear accountability.  What we want is fair, equitable measures of student success, both to evaluate students and to evaluate teachers.  What we don't need is a bunch of politicians making pronouncements on a subject about which they are completely ignorant.


They fear it because they’re more concerned about protecting the jobs of tenured teachers than serving the students in desperate need of a good education.

I don't know a single teacher who is in favor of tenure protecting substandard teachers.  The tenure rules are there for a reason -- to give protection to teachers from capricious administrators, and to ensure due process.  No one in education is in favor of tenure abuses like the so called "rubber rooms" where poor teachers are corralled because they can't be fired.  But this problem can be fixed without jettisoning the entire system.


They want to run everything top-down from Washington.  They tell us they’re the experts and they know what’s best.

So instead, we're supposed to listen to you because you are an expert and you know what's best? 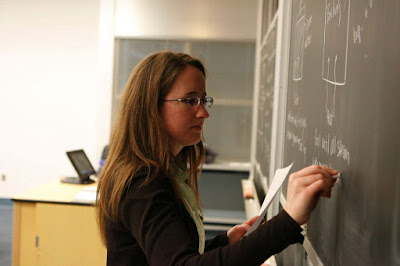 You want to know how to fix the system?  Adequate funding and fair fund distribution formulas.  Strong curricula that are not beholden to test-for-profit firms like Pearson Education.  Support for teachers in inner cities and other places where poverty, broken families, drugs, and gangs play a role in the failure of schools.  Powerful, dynamic teacher training programs.  Salaries and benefits that are sufficient to attract the best teachers, stopping the bleed-out of talent we're seeing across the United States because of poor working conditions and vilification of the entire profession.

Last -- the one thing you and I might agree on -- put the oversight of education into the hands of the people who know the most about it, and get the know-nothing politicians to keep their noses out of it.

But that includes you, Mr. Trump Jr.
Posted by Gordon Bonnet at 3:38 AM