So yesterday, Ken Ham's flagship project Ark Encounter opened with much fanfare, thus proving that it takes $102 million dollars and a crew of thousands six years to support the contention that a 500-year-old man and his three sons could do the same thing in a few weeks without power tools.

Ham, naturally, is delighted.  It hasn't been smooth sailing; he was plagued with funding problems and a lawsuit over discriminatory hiring practices when it was discovered that he was receiving tax breaks from the state of Kentucky while simultaneously requiring that anyone who worked there (including volunteers) had to be practicing Christians who believed in biblical inerrancy.  That he actually succeeded was something of -- dare I say it -- a miracle.

"Nobody’s ever attempted anything like this before," Ham said, in an interview with Forbes, "because God never has brought all of these kinds of people — literally thousands of people — together to make it happen, until now."

Not even once, four thousand years ago?  Really?  Wasn't that kind of your point?

"We are bold about the fact that we’re doing it because we’re Christians and we’re doing it for the Christian message," Ham said.  "But we’re not trying to force it on people.  What we want to do is challenge people to consider that what they’re seeing was true and feasible.  We want to get them to take the Bible seriously." 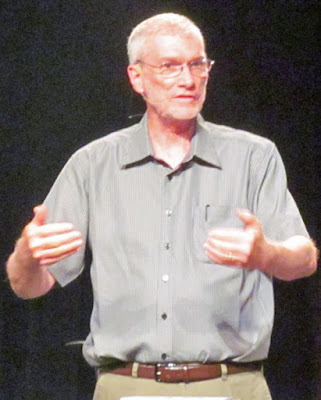 Because anyone with a shred of critical thinking ability would take seriously the conjecture that (1) there was enough rain to flood the entire Earth, followed by (2) all the water miraculously going somewhere ("away," presumably), followed by (3) all the sloths somehow ambling their way from Palestine back to the Amazon Rain Forest unaided.

And we won't even go into the mental gymnastics that it would take to believe that two of every animal species on Earth would fit on a 512-foot-long ship in the first place.

Ham is thrilled by the whole thing, as one might expect, but is not content to rest on his laurels.  He is -- according to Forbes -- planning on taking on as his next project building a full-size replica of the Tower of Babel, to commemorate another time that the God of Love decided to smite the shit out of his creations for getting uppity.  Apparently, though, Ham has to figure out how tall to build the thing, because that's never mentioned in the bible -- just that it was "tall enough to see heaven."

Which is pretty freakin' tall.  I bet he'll need an even bigger budget this time.

I'm happy to say, though, that for those of you who prefer to deal with reality, there is an exhibit at the American Museum of Natural History in New York City that has models of what scientists currently believe dinosaurs looked like (with no nonsense about trying to keep velociraptors on a boat for forty days and forty nights without their eating everything in sight).  And the current research is that many of them had... feathers.  Which kind of changes our perception of them, doesn't it?  No more scaly terrors, à la Jurassic Park; the current conception is more like a nightmarish cross between Godzilla and a chicken.  All of which, by the way, is borne out by the evidence, which includes fossilized feather imprints around dinosaur skeletons, not to mention actual feathers preserved in amber. 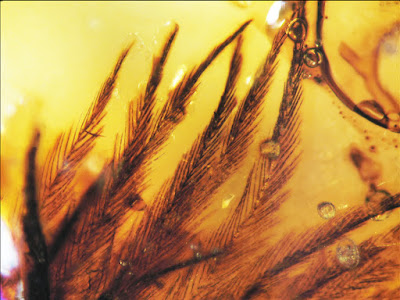 So as counterintuitive as it is, the dinosaurs actually didn't go extinct.  We still have dinosaurs -- we just call 'em "birds."  Think about that next time you're feeding the chickadees.

Anyhow, if I'm going to blow some money on admission, I think I'm heading to New York rather than Lexington.  I don't have anything against fairy tales as long as they're labeled that way, and the fact that Ham et al. are trying to fool yet another generation of children into believing that Science is Evil and the Earth is 6,000 years old just grinds my gears.  Plus, I think just reading the labels on the displays would probably send my blood pressure through the roof, and heaven knows I don't need that.
Posted by Gordon Bonnet at 2:22 AM