Close encounter of the weird kind

If there's one thing I've said over and over about this presidential election, it's, "This really can't get any weirder, can it?"  (Of course, I've also said "What the fuck?" more than once, but I suspect I'm not alone in that.)  Yesterday was the first day of the Republican National Convention in Cleveland, Ohio, and the Democratic National Convention is next week in Philadelphia.  I'm fully expecting to use both of those phrases several times over the next couple of weeks

Starting with the fact that Karl Rove was stopped while trying to board his plane to the RNC by none other than Alex Jones.  Jones is well known to those of us who like to keep our pulse on the lunatic fringe.  He runs the "news" outlet InfoWars, which mostly seems devoted to proving that President Obama is an America-hating Muslim, when it's not claiming that every damn thing that happens in the world is a "false flag."  ("False flags," you probably know, are government-staged riots and so on designed to distract us from the real news.  Given the recent spate of terrorist attacks and police shootings, we're distracted enough, okay?  You can lay the hell off.)

Rove, on the other hand, was one of President George W. Bush's chief strategists, and distinguished himself mostly on the basis of (1) looking like a huge mutant baby with an enormous forehead, and (2) somehow, inexplicably, meriting the nickname of "Turd Blossom" from the Commander in Chief himself.  Other than that, he mostly involved himself with smearing politicians he didn't like (such as his trash-talking the military service record of Georgia Senator Max Cleland, who is a triple amputee due to injuries in the line of duty).

So any meeting between these two would have to be epic.  Jones launched into some hard questions right away, such as asking if Rove was going to support Trump or if he was "siphoning money off of him to make sure Hillary wins."  Rove declined to answer, only saying that as he was now working for Fox News, he was not interested in appearing on the Alex Jones Show.

Need I mention that the whole time, one of Jones's operatives was filming the encounter? 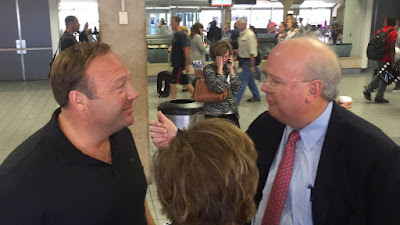 So Rove started to get pissed off, with Jones crowing that this just proves his point.  Whatever "his point," actually was, something I've had a hard time identifying myself whenever my blood pressure is too low and I listen to his latest rant on InfoWars.  By this time Rove realized that arguing with Alex Jones is about as fruitful an occupation as discussing philosophy with a chicken, so he tried to get away to safety.  Jones, unsurprisingly, followed him, considering any kind of retreat a victory for his side.

Until, that is, it became apparent that Rove wasn't just trying to flee, he was going to a Customer Service desk to ask them to summon security.  Jones at that point decided that discretion was the better part of valor, and did what the Knights of the Round Table did when confronted with the Killer Rabbit of Caer Bannog. 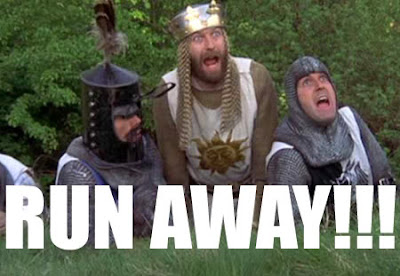 I strongly encourage you to watch the entire thing, because it's hilarious in a scary sort of way.  You can watch the whole encounter on the link I posted above.

So keep your eye on the news, especially given that at the RNC large numbers of the attendees are expected to be armed.  Because there's no way that that could end badly, right?

Of course right.
Posted by Gordon Bonnet at 2:11 AM