It's been a while since we've looked at bizarre alt-med health claims, so I was excited to stumble on an article in WellnessMama called "How to Get Healthy While You Sleep: How to Use Earthing & Grounding to Boost Health."

We're put on notice right away in the first paragraph when we read the following:


I’ve been self-testing an innovative new way (inspired by a very old way) of reducing stress and improving sleep lately and I now feel like I have enough personal data to pass on my results to you.

Because if there's anything that we find out from any reputable scientist, it's that the plural of "anecdote" is "data."  But this is only the beginning of the issues with this article, so we'll let that be for the moment.

The next thing she tells us is that we would all benefit from coming into direct contact with the ground regularly, i.e., walking barefoot.  I'm certainly not opposed to that; in fact, when the weather is warm, I tend to wear the legally permissible minimum amount of clothing, and in fact have been known to enjoy a nice skinnydip in my pond at times when no one is looking.  But wait till you find out why she thinks that going barefoot is good for you:


Basically, the theory is that our bodies are meant to come into contact with the Earth (a “grounding” force) on a regular basis. Positive electrons in the form of free radicals (ever heard of those guys?) can build up in our bodies and direct contact with the ground balances this out as it is a negative grounding charge.

Our bodies and cells have electrical energy, and especially with the high prevalence of Electromagnetic waves, Wi-Fi and mobile phone waves, many of us have a high amount of positive electrons built up in our bodies.

"Positive electrons" do exist, by the way.  They're better known to physicists as "positrons."  But there's one problem with her claim, and that is that positrons are actually antimatter.  If your body built up a "high amount of positive electrons," they would come in contact with the plain-old-garden-variety negative electrons in your body, self-annihilate, and you would explode in a flash of gamma rays.

Which honestly sounds worse than being stressed and sleepless. 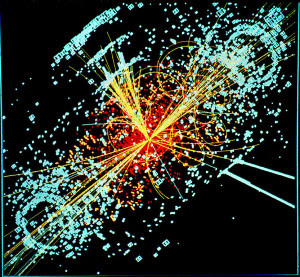 [image courtesy of CERN and the Wikimedia Commons]

Oh, but it's all real, she assures us:


At first I was skeptical that something so simple could work but after researching it... it seemed at least plausible that it would work.  I also ran the idea by some electrical engineer friends and a friend who has done research in the biomedical field and they confirmed that there was some science to back it up.

So let me get this straight; you told some electrical engineers and biomedical researchers about your body building up positive electrons, and how those were the same thing as free radicals, and they said that this all made sense?

Where did your friends get their degrees, Big Bob's Discount Diploma Warehouse?

Then we hear some of her evidence that this works:


Have you ever noticed that you sleep better on a beach vacation after walking in the sand or being in the ocean?  The sand and ocean water and both naturally conductive materials and both help ground the body and remove excess positive electrons.  For the same basic reason that we ground electrical outlets to avoid the build up of excess positive charge, our bodies need the same ground effect.

No, I think I sleep better while on vacation because I don't have to spend every spare minute thinking about lesson plans and grading papers.  And we don't ground electrical outlets to "avoid the buildup of excess positive charge," it's so that if there's a short in the wiring, the current will divert harmlessly rather than electrocuting you or burning your house down.

Or did you learn about that from your electrical engineer friends, too?

Then we hear all about the things that walking barefoot can cure, which include high blood pressure, insomnia, muscle aches, headaches, jet lag, bedsores, and (I'm not making this up) snoring.

Bet you didn't know that snoring was caused by excess positrons in your nasal cavity, did you?  I sure didn't.

In any case, the reality is that even if you wear rubber-soled shoes -- hell, you could wear an entire rubber suit if you wanted -- you ground yourself every time you touch a faucet (or anything metallic that's in contact with the ground) with your bare hand.  It's the principle of the carpet shock; you do sometimes build up a static charge (it could be positive or negative) on your body, but if you brush against a grounded object, the excess electrons will jump one way or the other and you're going to become neutral with respect to that grounded object.

Because that's the way electricity works.

Then she goes into how we should not only all walk barefoot, we should buy "grounding mats" to sleep on.  At that point, my eyes were crossing and I had to stop reading.

So the upshot of it all: go barefoot if you want.  It does feel nice, although we do have shoes for a reason, which you'll discover the next time you're "grounding yourself" in your front yard and you step on a thistle.  As far as the rest of her claim, it seems to be unadulterated fiction.

Just like her "free radical positive electrons."
Posted by Gordon Bonnet at 3:37 AM