There's a smug, snarky meme going around social media lately.  It's got a photograph of President Obama and the caption, "Faced with a terrorist crisis, Obama issued a stern statement about climate change."  The implication, of course, being that here we have this terrible crisis that is putting Americans at grave risk, and the president is dithering around talking about the weather.

Well, first, I doubt seriously whether he issued any statement about climate change in response to questions about terrorism.  But what this meme gets the most wrong is the fact that it would make sense for him to do so.

Because climate change is the single most serious threat to national security we are currently facing.

Let me make this clearer.  Terrorism in general, and Islamic terrorism in particular, gets a lot of media attention, and for good reason; ISIS and their ilk are horrible, bloodthirsty people, behaving in a fashion that defies comprehension.  They have brutalized their own people, and struck again and again in other countries with suicide bombs and guns.

But in terms of numbers at risk, there is no comparison.  According to the National Consortium for the Study of Terrorism and the Response to Terrorism, 3,066 Americans have been killed in terrorist attacks since 9/11 (of which 2,902 occurred on 9/11).  Even if you factor in terrorist attacks worldwide, we come to a figure of an average of 20,000 deaths a year from terrorism.  Most of these occurred in Iraq, Afghanistan, Pakistan, India, Nigeria, and Egypt -- illustrating once again that the people most at risk from Islamic terrorism are other Muslims.

Oh, but that's just a prediction, right?  Before you start scoffing about predictions, you might want to hear about a study by Kevin Trenberth, Lijing Cheng, and John Abraham published just this week in Ocean Sciences, which shows that the climate models of ocean warming have predicted with an accuracy within 3% of the actual measurements.

In other words, (surprise!) the scientists actually know what they're doing, and are not fudging the results because of some weird conspiracy to get funding (one of the most common jabs you hear aimed at climate scientists).  And the work of Trenberth et al. has been thoroughly vetted -- at the time of publication, its results were independently corroborated by two other teams. 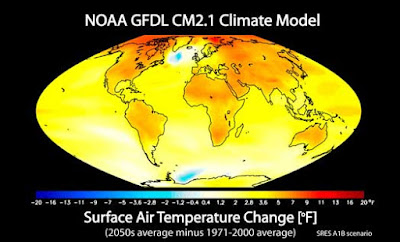 The ocean warmup is having effects here and now on the weather.  This year we've seen record highs all over the place, including a nearly unimaginable all-time record high of 129 F in Kuwait last week.  The problem is that predicting climate and predicting weather aren't the same thing; as demonstrated by the Trenberth et al. study, climate models are working brilliantly, but it still doesn't allow us to predict the day-to-day ephemeral fluctuations we call weather.  June was the 14th straight month of record heat, but here in the United States it's come with catastrophic flooding in West Virginia while only two states north, here in upstate New York, we're experiencing a record-setting drought that has completely dried up the area's famous waterfalls, and which -- if it doesn't abate soon -- will leave the city of Ithaca without drinking water and Cornell University without sufficient water for the 22,000-odd students who will be returning in the fall.


"Climate Inaction Figures."  Worth watching, even if painfully close to the truth.

So if the snarky little meme I referenced above actually was true, it would show nothing more than good sense on the part of our leaders.  But with the way the presidential race is currently shaping up, I'm not confident that addressing this catastrophic threat to the long-term habitability of our planet is going to be anywhere on the agenda.
Posted by Gordon Bonnet at 3:53 AM