Remember last summer, when the "Jade Helm" training exercise in Texas got a whole bunch of conspiracy theorists stirred up about how the military (acting under Obama's orders, of course) was about to take out the governor of Texas and institute martial law, complete with guillotining of innocent civilians?

And most importantly, how none of that happened?

A couple of days ago, a guy named Jeff Stern was on a highway near Lexington, Virginia, and noted the presence of several military vehicles labeled "UN" on the road with him.  He took pictures, and posted them to his Facebook page along with the caption, "Can't begin to tell you how many of these I passed today on 81 near Lexington VA.  Interesting times ahead!"

And with that, we're off to the races. 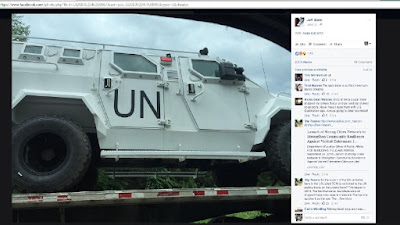 Posts began popping up all over with many and varied hypotheses about what was going on with the trucks.  One claimed that these were trucks containing troops intended as peacekeepers during the Republican and Democratic Conventions, scheduled for later this month; another that it was the first sign of martial law being declared; a third said that they were heading south to put down an upcoming armed insurrection that was going to declare Texas to be an independent country; a fourth, predictably, that President Obama is up to something, probably in cahoots with his Muslim buddies; and the fifth and most popular one, that this was the precursor to an invasion by a coalition from the United Nations that was so completely sneaky and top secret that they rode around on an interstate highway in trucks labeled "UN."

So naturally, every conspiracy theory site in the entire world was buzzing with what this could all be about.  And if you ever want to truly despair of the future of the human race, go to a conspiracy theory site and read the comments.  Because remember the fundamental rule of the internet: the comments section is always weirder, stupider, and crazier than the article to which they're appended.  Here, that sets the bar pretty high.  Take, for example, the following comment on the site Hidden Americans:


Nothing should surprise you as the Obama administration has almost revoked our constitution with the help of congress and the supreme courts [sic] insane decisions.  We can't be surprised at anything that is going down.  We are not going to be surprised if somehow this election is cancelled and Obama declares marshall [sic] law.

I thought Marshall Law had something to do with rebuilding Western Europe after World War II.  But I could be remembering wrong.

Fortunately, while the conspiracy theorists were busy having multiple orgasms over the latest Black Ops, a few people with some degree of common sense did some digging and found out what was really happening.  And it turned out to be... boring.  The actual story was broken in The Blaze, because the only thing that would make this whole thing more ridiculous is having a news site run by Glenn Beck be the voice of reason and common sense:

A representative from Alpine confirmed to The Blaze that the vehicles were, in fact, purchased by the U.N. and were being delivered to a nearby port for use outside the United States.

When the photos first made headlines, one person who commented on a post by Facebook user Jeff Stern, who shared the images, said, “These are manufactured in Danville. Thats why you saw them in VA. They were being delivered.”

Which, of course, had exactly zero effect on the conspiracy theorists, who immediately began to leap all over the story in The Blaze, claiming that it was TOO martial law, dammit.  Here are just a few of the comments I read before my prefrontal cortex cried "uncle:"
And then, there's my favorite one:

I wonder how you "preposition equipment?"  "Of the tank, by the tank, for the tank...?"

So yeah.  I have to keep telling myself that the people who post these things are the loud, insane minority.  Because if I start focusing too hard on the fact that these people vote, I end up curled up in a fetal position under my desk for the rest of the day.

In any case, there you have it; this summer's answer to "Jade Helm."  Which will result in nothing, just as Jade Helm did -- no martial law, no executions, no overthrowing of state governments, no troops storming in and taking over small-town America.  In fact, the only thing Jade Helm seemed to accomplish was giving Alex Jones something to rant about for six months, which is probably what will happen again here.  But because the conspiracy theorists never seem to remember that they have a batting average that is so close to zero as to make no difference, the next time some odd-looking vehicle is spotted in Minnesota or somewhere, we'll start all over again from the beginning.

Because conspiracy theories are the gifts that keep on giving.
Posted by Gordon Bonnet at 3:10 AM