I try to keep myself informed about what's going on in the world, but lately, what's going on in the world has led me to the unfortunate conclusion that humans are, by and large, crazy.  It's not a comforting thought.  But between the shootings, terrorist attacks, civil unrest, and the Republican National Convention, I seem to have no other option.

Because the news I'm seeing out there is simply too depressing, for today's post I'm retreating to my happy place, better known as science.

Think of it as my answer to flowers, rainbows, and friendly bunnies.

So let's take a look at a few new developments in the scientific world, and take a refreshing break from the irrationality and insanity that is the main course in the media these days.

First, from field biologist Claire Spottiswoode of the University of Cambridge, we have a charming study of a partnership between humans and wild animals -- in this case, between human honey-hunters in Africa and a little brown bird called the Greater Honeyguide.

Honeyguides have been partners with humans for as far back as we have any information.  Honey-hunters in Mozambique call in the birds with a trilling sound, and the birds then lead their human pals to bees' nests.  When the nest is raided, the humans share some of the honeycomb with their guides, so it's a mutually beneficial relationship.

"Communication between domesticated species and people is well known, but the fascinating point in the case of the honeyguide is that it describes such a relationship between a wild animal and humans," said behavioral biologist Claudia Wascher of the University of Anglia Ruskin (UK), commenting on Spottiswoode's study.  "This has not been described scientifically before." 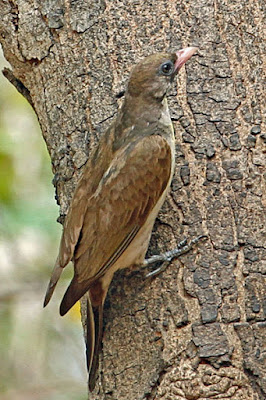 Next, we have a discovery from the world of astronomy.  Two rocky, Earthlike planets have been discovered that lie in the habitable zone -- around the same star.

The star, called TRAPPIST-1, is only 40 light years away.  While it is certain that the two planets, dubbed TRAPPIST-1-b and c, have atmospheres and are not gas giants like Jupiter and Saturn, it remains to be seen whether they actually are capable of harboring life.

"Now we can say that these planets are rocky. Now the question is, what kind of atmosphere do they have?" study author Julian de Wit of MIT said.  "The plausible scenarios include something like Venus, where the atmosphere is dominated by carbon dioxide, or an Earth-like atmosphere with heavy clouds, or even something like Mars with a depleted atmosphere.  The next step is to try to disentangle all these possible scenarios that exist for these terrestrial planets."

However, it must be said that "only 40 light years away" is still far too distant for any conventional spacecraft to reach.  Even communicating via radio waves wouldn't be very interesting, given the forty year transit time (one way) for messages:

So it doesn't really lend itself to scintillating repartee. But it's still a tremendously exciting discovery, further indicating that habitable planets are probably common in the universe -- and that we might not be alone after all.

From geologists Guilherme Gualda (of Vanderbilt University) and Stephen Sutton (of the University of Chicago) we have a paper that indicates that supervolcanoes might only give a year's warning before a colossal eruption.  They studied the Bishop Tuff, an outcropping in California that formed 760,000 years ago during the massive Long Valley Caldera eruption, and through analysis of quartz crystals deposited there concluded that the decompression gas bubbles that initiate the explosion form really quickly.

"The evolution of a giant, super-eruption-feeding magma body is characterized by events taking place at a variety of time scales," said Gualda.  "Tens of thousands of years are needed to prime the crust to generate sufficient eruptible magma.  Once established, these melt-rich, giant magma bodies are unstable features that last for only centuries to few millennia.  Now we have shown that the onset of the process of decompression, which releases the gas bubbles that power the eruption, starts less than a year before eruption."

When people think of supervolcanoes, they usually come up with Yellowstone, but it bears mention that there are other supervolcanoes in the world -- Campi Flegrei in Italy, Oruanui in New Zealand, and Toba/Tambora in Indonesia, to name three.  So it's a good thing that the geologists are monitoring the situation, although you have to wonder what they'd do if they found that an eruption was imminent.  "Evacuate Italy" doesn't seem like a viable plan.  But because I said that this post was going to be cheerful and uplifting, perhaps I'd better move on.


Researchers at Cardiff University in Wales have just made a discovery that could help the world move to a post-fossil-fuel economy: that using a cheap catalyst and sunlight, hydrogen gas can be made from grass clippings.

The technique is called photocatalysis, and the catalyst is nickel.  (The process also works well using palladium or gold as a catalyst, but that ups the cost significantly.)  Basically, the idea is that using the catalyst and sunlight as an energy source, cellulose in plant matter can be broken down and produce hydrogen, which can then be used to power hydrogen fuel cells.

"Hydrogen is seen as an important future energy carrier as the world moves from fossil fuels to renewable feedstocks, and our research has shown that even garden grass could be a good way of getting hold of it," said Michael Bowker, who headed the study at Cardiff.  "This is significant as it avoids the need to separate and purify cellulose from a sample, which can be both arduous and costly...  Our results show that significant amounts of hydrogen can be produced using this method with the help of a bit of sunlight and a cheap catalyst."

And when you consider the amount of cellulose-rich agricultural waste that is simply discarded -- think rice husks and cornstalks -- it'd be an amazing breakthrough to be able to use it for fuel production.

So that's our brief retreat into the cheering world of scientific discovery.  It's nice to know that there are still people who are working toward understanding the universe and bettering humanity, and that they're not all crazed, foaming-at-the-mouth lunatics.  It's a refreshing thought.  Maybe I should sustain the feeling by avoiding the news for a while.  I'll miss hearing the spin about Donald Trump's speech last night at the RNC, which would be an added benefit.
Posted by Gordon Bonnet at 3:53 AM