Because the world has so much to worry about -- terrorism, climate change, governmental instability in too many countries to list -- today we're going to consider the following question:

This is the claim of an I-hope-this-isn't-serious article in The Mirror, wherein we see the photographic evidence, to wit: 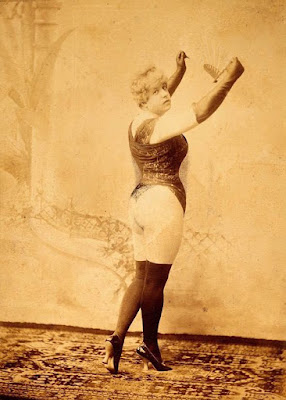 Photograph of a British man in drag, circa 1896

Here, for comparison purposes, is a photograph of Johnson, standing next to ex-Prime Minister David Cameron: 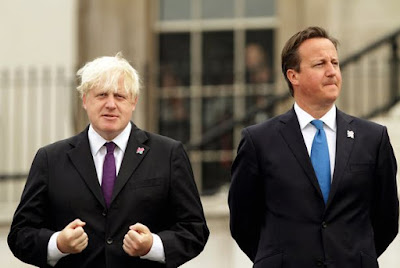 I'll admit that there is some resemblance.  But before you say, "Somebody notify Stephen Hawking!  Apparently time travel is real!" allow me to point out that the same article claims that Cameron is actually Catherine the Great of Russia: 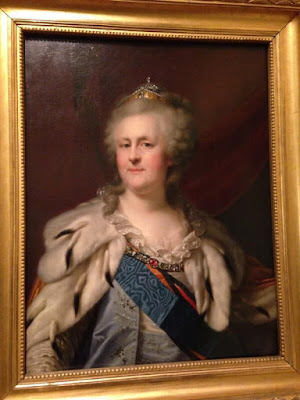 And again, I have to say that there's a similarity.  Of course, there is good historical evidence that Catherine had several children, which kind of precludes her from being David Cameron in drag.  But someone should insist that Cameron model a low-cut dress and frizzy gray wig just to make sure.

While I suspect that the article in The Mirror was tongue-in-cheek, it bears mention that there are people who believe stuff like this.  Regular readers may recall that I did a piece a while back about the claim that Nicholas Cage and Keanu Reeves are immortal, based on the discovery of a couple of historical photos and/or paintings that resemble the two actors.  And this one isn't just a for-laughs, "Hey, look how similar these two people are!" sort of thing.  These people are serious.  There are articles all over woo-woo sites about how Cage and Reeves are undead who have been around for hundreds of years, never aging, simply switching identities ever fifty years are so, and somehow still never mastering more than a single facial expression each.

The fact is, there are random similarities in the facial features between unrelated people, and it's nothing more than a coincidence.  Just last week, a woman at the writers' conference I attended grinned every time she saw me, and eventually felt obliged to explain that she wasn't flirting with me, I look exactly like her favorite nephew.  "You even dress like him," she said.  (I spent the entire week in a t-shirt, cargo shorts, and sandals, and she said that's his summer uniform, too.)

But it's not really surprising that there's another guy out there who shares my rather unfortunate face.   There are only so many possible combinations of facial features, so somewhere there'll be someone who looks like you.  Similar, after all, doesn't mean identical.  (And my mom was adamant that I wasn't one of a pair of twins separated at birth.)  So any claim about one famous person being the same as a long-dead historical figure is kind of a non-starter.

I'm still in favor of the dress-and-wig idea for David Cameron, however.
Posted by Gordon Bonnet at 2:58 AM