The bankruptcy of denialism

It's time for me to take a short break from Skeptophilia.  Next week I'll be donning my other hat (fiction writer) and attending/giving a talk at the Storytellers of America conference in Fayetteville, Arkansas, so this will be my last post until I return, Monday, July 18.

During the interim, you should check out a few of my favorite skeptic/atheist sites.  Here are some suggestions:

Or, alternatively, you could read some of my fiction, links to which have been helpfully provided at the right.  I have three novels (Kill Switch, Lock & Key, and Sephirot) out in print from Oghma Creative Media (but also available for e-readers); my short story "The Hourglass" is also available in e-reader format, for only 99 cents.

In any case, have a lovely week, hoist the banner of skepticism high, and keep those cards & letters coming.  I'll be back at it when I return from Fayetteville next weekend.

I try to be open-minded and balanced about things, but there comes a point when anyone who is truly using evidence and logic as the sine qua non of understanding has to say, "Okay, the time for debate is over.  This is settled."

That time has come for the climate change deniers.

I know I've rung the changes on this topic a number of times before, but two things popped up in my newsfeed yesterday that highlighted the fact that the deniers are at this point not only without a leg to stand on, evidence-wise, but are morally bankrupt as well.

First, we had a meeting this week of Britain's Global Warming Policy Foundation, which despite the name is a pro-fossil-fuel, climate change denialist lobby that is seeing an opportunity in the recent vote by Great Britain to withdraw from the European Union.  The keynote address was given by David Campbell, professor at Lancaster University, wherein his main point was the unfairness of the Paris Accord's mandate that rich nations make carbon cuts while poor nations do not, along with a withering criticism of China's greenhouse gas policy (drafted last year) as completely unrealistic.

It was only after Campbell tried to access his link to the Paris Accord document that he realized his mistake.  The site was an "expired link" and would not load.  The reason?

The passage he quoted was from a draft that was superseded by an updated version of the Accord in which said mandate had been removed.

And about China's policy, he conveniently failed to mention a billion-dollar investment approved by the Chinese government -- in clean energy.

The audience overcame their embarrassment quickly, because there's nothing like assuming your conclusion for maintaining support of a position.  One attendee went back to the tired old denialist claim about the global warming "pause" -- neglecting the fact that 2016 has thus far been the warmest year on record, beating the previous record (2015), which beat the previous record (2014), and so on and so forth.

That's some pause, right there. 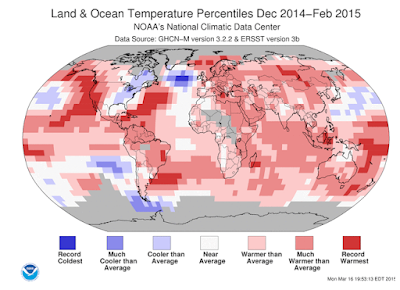 Then, here in the States, we had a revelation (surprising no one who keeps up with such news) that one of the leading denialist groups in the US, The Center for the Study of Carbon Dioxide and Global Change, was being funded by recently-bankrupted coal giant Peabody Energy, Inc.

This, you may recall, is the group that published papers such as the never-to-be-forgotten "The Many Benefits of Atmospheric Carbon Dioxide Enrichment."

The head of the CSCDGC, Craig Idso, is a familiar name in the denialist world.  He has spoken at meetings of the Heartland Institute, the political lobby group driven by fossil fuel interests, and was instrumental in pushing a committee to draft policy countering the UN's Intergovernmental Panel on Climate Change's statement that climate change was here and now, and that mitigation was absolutely critical.

So the rallying cry of the denialist movement, "Follow the money" -- intended to imply that the scientists were in the pay of environmental lobby groups -- turns out to be a far better guide for sorting fact from fiction than the deniers ever intended.

And outside, the world continues to warm.  Here in the Northeast, we're in the middle of a sweltering drought; only a few states to the south, they're being washed away by flash floods.  The southwest has been under a "heat dome" for weeks that has brought the air temperatures up to 120 F in Phoenix, Arizona.  Hell, it was 93 F in Siberia a couple of days ago.

And we haven't even reached the hottest part of the summer yet.

So we still have room for more warming coming soon, perhaps even getting near last summer's record -- an unimaginable heat index of 165 F in Bandar Mahshahr, Iran on July 31.

So that's the news from the climate change front.  The fossil fuel industry is still pulling the strings, and the politicians are still dancing to their tune.  How much longer that will continue probably depends on how much worse the weather gets.  Because if there's one thing that will turn things around, it's when the crazy weather starts to affect the pocketbooks of the wealthy business owners.

Then we might see some change on a political level.

But the tragic part is that by then, it might be too late to do anything about it.
Posted by Gordon Bonnet at 3:58 AM