I'm back home after a very productive week of writing, networking, and general schmoozing with a bunch of my fellow fiction authors at the Storytellers of America Conference in Winslow, Arkansas.  The publisher who handles my books -- Oghma Creative Media -- was well-represented, as they're headquartered in Bentonville, right nearby.

Among the writers I got to meet was another Oghma author, J. C. Crumpton, and (most fun of all) I got to hear an excerpt from his fantastic upcoming release Silence in the Garden.  Silence is about an (allegedly) true tale of the supernatural that I had never heard about -- the story of the Crescent Hotel in Eureka Springs, Arkansas.

The Crescent bills itself as "the most haunted hotel in America," and every year has hundreds of visitors motivated to visit solely by its reputation.  To be sure, there are lots of other reasons; the Crescent is a beautiful and historically important building, has 78 luxurious rooms, and is smack-dab in the middle of the Ozarks, which (I found) is stunningly beautiful even though it's prone to thunderstorms that'd knock your socks off.

Hopefully only in a figurative sense.

The Crescent Hotel was opened in May of 1886, mostly to accommodate visitors who had come to partake in Eureka Springs' "healing waters."  This kept it going for about fifteen years, until people figured out that the "healing waters" were actually just "plain old water," and the tourists began to go elsewhere.  After that it became for a time the Crescent College and Conservatory for Young Women.    That, too, turned out to be a financial failure; it was abandoned for a time, had a brief return to its heyday of sham cures in the 1930s (ended when the proprietor was convicted of defrauding cancer patients and was sent to Leavenworth Prison), and returned to being a hotel in the 1950s. 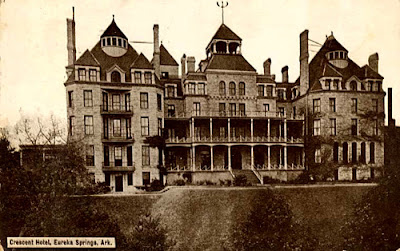 The Crescent Hotel, circa 1900 [image courtesy of the Wikimedia Commons]

There was a fire that caused extensive damage in 1967, but due to its historical value and beauty, it was rebuilt and is now once again the gorgeous landmark and tourist destination that it was in its early days.

A building with such a checkered past, however, is bound to have some sketchy stories attached to it, and very early on the Crescent gained a reputation for being haunted.  The oldest ghost people see is called "Michael" and is said to be the spirit of a red-haired Irish stonemason who was working on the roof shortly before its grand opening in 1886, lost his balance, and fell to his death.  From the days of its serving as a cancer hospital there are the ghosts of a nurse and several patients, all dressed in white, that have been seen on multiple occasions.

What is interesting about these accounts is that unlike most ghost stories, the specters that supposedly populate the Crescent seem pretty benign.  The dining room has been visited by an elderly gentleman in fine 19th century dress clothes, who if approached, will explain to you that he "saw the most beautiful woman here last night and is waiting for her to return."  Which, honestly, is kind of sweet.  About the only truly frightening apparition -- except insofar as any ghost would probably scare me to the pants-wetting stage, because I am, not to put too fine a point on it, a great big wuss -- is the spirit of a teenage girl who, according to the legend, lived in the hotel during its time as a Conservatory for Young Women, and fell (some say she was pushed) to her death from a balcony.  People see her falling, hear her scream -- and when they rush to the sidewalk to see who has taken such a dreadful plunge, they find... no one.

(This is, in fact, a central piece of Crumpton's novel.  Trust me, in his hands, it is way creepy, and when this book is published, you should all read it.)

I'm a little disappointed at not having had time on this trip to go see the place.  Considering my fascination with tales of the paranormal, it's frustrating to have come so close to the "most haunted hotel in America" and not allowed the ghosts a shot at convincing me of their existence.  But given that my publisher is not far away from there, I'm sure there will be other opportunities.

So many hauntings, so little time.
Posted by Gordon Bonnet at 3:28 AM