A trio of straw men

I had three interactions in the last 24 hours that left me wanting to bang my forehead against the wall.

I was going to call them "conversations," but "conversation" implies "exchange of ideas," which is not what this was.  This was more "one person ranting at the other, followed by the target of this rant trying unsuccessfully to find some way of responding other than shouting 'Are you a moron?  Or what?'"

The common thread in all of them was the straw-man fallacy -- mischaracterizing an argument, and then arguing against that mischaracterization.  Honestly, it's a way of saying "ha ha, I win" without doing the hard work of finding out what your opponent actually believes.

The first of these interactions was over a piece I posted here at Skeptophilia a while back on the evolution of bills designed to block the teaching of evolution.  I thought the academic paper I was writing about was absolutely brilliant, but evidently not everyone does, because I received the following comment:


I don't understand how anyone can believe in the fairy tale of evolution.  You honestly expect us to believe that one animal can just morph into another by magic?  It's so easy for you to believe that a chihuahua would become a race of large sea creatures?

So against my better judgment, I actually responded.  The whole time, my brain was shouting at me, "You doofus.  Why are you bothering?  What do you think you're going to accomplish?"  But I wouldn't listen to me.  So I wrote:


Of course evolutionists don't think chihuahuas turned into orcas.  The very fact that you can't come up with an actual example of what evolutionists are saying indicates that you're not really all that interested in the discussion, you're just looking for an opportunity to make foolish statements and then pretend you've won the argument.

He then did something kind of sneaky; he set out bait for me.


Okay, then, tell me something evolutionists do believe. 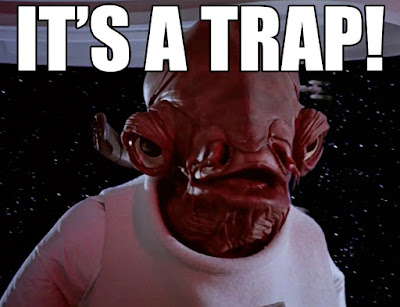 
Here's just one example.  Birds are clearly descended from dinosaurs, especially the deinonychid dinosaurs (including the famous Velociraptor).  They show a lot of homologous bone structure -- and in fact, some members of this dinosaur group had feathers.  Recent protein sequencing of soft tissue preserved in dinosaur bones has also supported a close relationship to modern birds.


Oh, okay.  So it's not chihuahuas morphing into orcas, it's a T-rex morphing into a hummingbird.  That makes so much more sense.

... only to get caught again shortly thereafter by someone who posted the following image on Twitter: 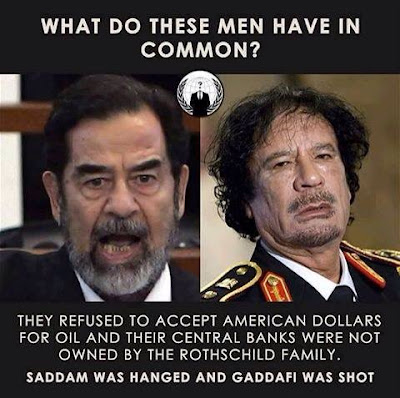 And not having learned from what had happened only two hours earlier, I responded:

So the fact that they were also both crazy homicidal dictators had nothing whatsoever to do with it?

At which point the original poster called me a "sheeple," which in my opinion is a word whose use should immediately disqualify you from rational discourse in a public forum for a year, unless in that time you can show evidence of your successful completion of a college-level logic course.

But since I never make the same mistake twice -- I make it five or six times, just to be sure -- I then got into a snarl with a Facebook friend who posted an article saying that all of the polls are wrong, that Donald Trump is going to win in a landslide.  By this time I was completely fed up with counterfactual nonsense, and I said, "How can making up reality as you go along be comforting to you?"

She immediately unfriended me, which I guess I deserved, if not for the message, for the snarky way I said it.

So apparently, I'll never learn.  Not only does engaging in arguments on the internet piss off all of the participants, it's completely futile.  And trying to reason with someone who didn't come to their conclusion using rational evidence is a losing proposition right from the get-go.  It reminds me of the quote -- attributed to several different sources -- "You can't logic yourself out of a position you didn't logic yourself into."  Or, as Thomas Paine put it, "To argue with a person who has renounced the use of reason is like administering medicine to the dead."
Posted by Gordon Bonnet at 2:00 AM