A tsunami of misinformation

One of the most frustrating things I encounter while doing research for Skeptophilia is sensationalized nonsense masquerading as fact -- especially when it is gussied up in such a way as to make it seem reasonable to the layperson.

This is the problem with the article "Fukushima Radiation Has Contaminated The Entire Pacific Ocean (And It's Going To Get Worse)" that appeared over at Zero Hedge yesterday.  In it, we have a rehash of the Fukushima disaster of 2011, which generated a horrific tsunami and breached a nuclear power plant.  The combined effects of the earthquake and its aftermath cost almost 16,000 lives, and left 230,000 people homeless -- some of whom are still living in temporary housing.

Unfortunately, that's about where the Zero Hedge article stops being factual and starts relying on sensationalist exaggerations and outright fabrication.  Here's a brief list of the inaccurate claims that appear on the article:
Well, it might be true that someone believes that.  Presumably the writer of the article does.  But there aren't any geologists who do.  The earthquakes occurred a year apart and over 17,000 kilometers from each other.  There is no seismic process that could possibly connect the two.

If that weren’t bad enough:

This isn't incorrect so much as it is misleading.  Note that nowhere in this statement (in fact, nowhere in the article) does it state how radioactive those 300 tons of water are -- i.e., how much radioactive cesium (the most common radioisotope in the leaked water) was present.  In fact, marine radiochemist Ken Buesseler has stated that ocean radiation levels near the disabled power plant are one thousandth of what they were immediately following the accident, and at any distance at all from the site the contamination is "barely discernible."
Cf. my previous comments about quantities and measurability.

This is referring to viral hemorrhagic septicemia, a deadly disease of fish that is caused by (note the name) a virus.  It has nothing to do with radiation or the Fukushima disaster, and was recorded in fish populations long before the earthquake.

Also, correlation does not imply causation.  Even if viral hemorrhagic septicemia had only been seen after debris from Fukushima washed ashore, it wouldn't necessarily mean that the contaminants in the debris had caused the disease.
300% of a minuscule amount is still a minuscule amount.

This is another viral disease called starfish wasting disease, and like the fish disease mentioned earlier, has bugger-all to do with Fukushima as there have been outbreaks of it since 1972.  However, there is some evidence that increasing water temperatures have made starfish more susceptible, so there's a connection to climate change, which is something we should be concerned about.

And no alarmist article would be complete without some scary pictures.  First, we have this one, from NOAA: 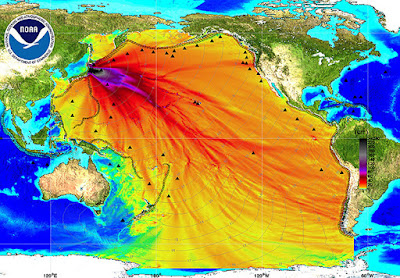 This has nothing to do with radiation leakage.  It's a map tracking wave heights of the tsunami as it crossed the Pacific, as you'd know if you had looked at the scale on the right hand side.

Then there's this one: Which shows a bunch of dead starfish.  But as I established a couple of paragraphs ago, this has nothing to do with radiation poisoning.

And so on and so forth.  The alarmist foolishness in articles like this is dangerous from a couple of standpoints. First, it makes it sound like the scientists themselves are ignorant of what's going on, or (worse) are actively covering it up for their own malign purposes.  Second, it misrepresents what the science actually says.  Third, it distracts us from problems that actually are global catastrophes in the making by focusing our attention elsewhere.

At a less-than-careful reading, though, such an article sounds well researched and factually accurate.  It has links, sources cited, uses technical vocabulary.  It's only if you take the time to do some research yourself that the whole thing collapses like a house of cards.

So caveat lector.  As usual.  And to the people who keep forwarding this article around, I'm respectfully asking you to stop.  It's hard enough to get people to trust legitimate science these days; this kind of thing only makes it worse.
Posted by Gordon Bonnet at 2:51 AM