Coming hard on the heels of a story about how hexagonal cloud formations in the south Atlantic proves the existence of the Bermuda Triangle, we have: a story about a guy in an evil clown mask who, after scaring people for weeks in rural Cambodia, died by accidentally stepping on a land mine.

This is one of those stories that those of us with a twisted sense of humor just would love to be true.  Much to the annoyance of most of us, the whole clown thing has (as I mentioned in a previous post) exploded recently.

Wait, that was a poor choice of words.  Let's just say that clown sightings have skyrocketed.  This of course leads to false sightings, not to mention copycats, and my guess is that the legacy of the evil clowns will be with us long after Halloween has come and gone. 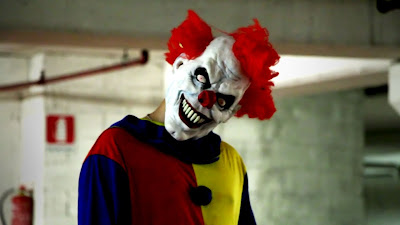 The problem with the story about the clown stepping on a land mine is, it's fake.  And that's why I'm writing about it.  Not only is the story false, the source of the story -- the Times of Cambodia -- is a recently-created bogus news site.  In other words, the Times of Cambodia appears to have been put online specifically to give visibility to this story.

And the problem is, it worked.  The story has progressed its way up the credibility ladder, and has (thus far) appeared in the Evening Standard, the Mirror, and the Daily Star, to name three.  Not that any of these is above posting a dubious news story to get readers' attention.  But these are at least approaching mainstream media -- in other words, a cut above such unadulterated baloney as InfoWars, Before It's News, and Area 51.

Whoever created the story (not to mention the Times of Cambodia) has also benefited greatly from social media.  I've now seen this story at least a half-dozen times on Twitter and Facebook, usually from people who apparently think that it's true.  So we're back to "check your sources, dammit," a theme I've rung the changes on so many times that I've lost count.

So I thought it might be a good idea to post a list of unreliable news sources.  This is not my own list (although I agree with it 100%) -- to give credit where credit is due, this comes from Sharon Hill's wonderful site Doubtful News.  But I'm hoping that since she and I are entirely on the same page about this, she won't mind my swiping her list and reposting it here.

Starting with the nearly always unreliable, not-even-once sites. Some of these are deliberate spoof sites (e.g. Topeka's News), others are claiming they're telling you the straight scoop but are so wildly biased that I'd automatically discount any claim they make (e.g. Natural News).  Here are the top offenders:

Then, there are the ones that are such ad-revenue-seeking clickbait that they tend to pick up any story that sounds sensational (like the killer clown story), so what they post is a complete hash of actual news, biased political grandstanding, and outright nonsense.  Anything from them falls into the "check another source" department:
So there you have it.  Some news sources to avoid.  Of course, that doesn't mean that what you find elsewhere is reliable; as always, use your brain and double check your sources.  Especially if you're considering forwarding a story about exploding clowns in Cambodia.
Posted by Gordon Bonnet at 2:16 AM