In support of my recent contention that the world has gone completely batshit crazy, today we have: exorcising gay demons that are infesting the White House.

This is the demand of one Julio Severo, a fundamentalist Christian blogger who writes over at Last Days Watchman, which has as its raison d'être proving that liberals and atheists (and worst still, liberal atheists) are bringing us ever closer to the End Times, as hath been foretold in the scripture.  Severo feels it is his duty to warn us all about how the aforementioned bad guys are going to usher in the appearance of the Four Apocalyptic Horsepersons, not to mention the breaking of the Seven Seals and the blowing of the Seven Trumpets and the pouring out of the Seven Bowls and the flushing of the Seven Toilets.

Okay, I made the last one up.  But it's not so much weirder than the rest of the Book of Revelation, which in my opinion reads like a bad acid trip.  But to Severo, it's all literally true, and therefore is a serious cause for concern.

Which is why Severo had a conniption when he found out that there was a briefing at the White House wherein Victor Raymond, a member of the Rosebud Sioux tribe who is an out bisexual, spoke on matters of addressing the treatment of bisexual individuals in our culture.  To make it worse, Raymond began with a prayer addressing his tribe's supreme deity, calling on "the Great Spirit, Wakan Tanka, to guide our words and thoughts so that we can speak true and strong." 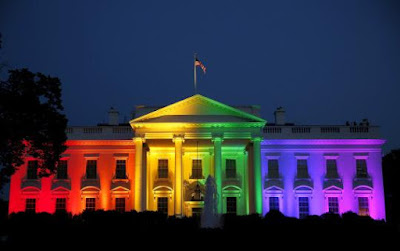 Well, that was enough to send Severo into near apoplexy.  Raymond had "invoked homosexual demons," and stern measures needed to be taken:


An interaction between spirits of homosexuality and Indian religions is not uncommon.

In Brazil, the most prominent homosexualists are adherents of African and Indian religions, very similar to voodoo. These religions embrace all forms of homosexuality as a gift from their “gods.” Such deities are considered demons in the Christian worldview.

A homosexual culture is a culture of demon possession.

Has the White House turned into a haunt of demons?

The first step for a “visitation” of such spirits is invocation — which was made at the White House. Homosexual spirits heard. Their presence is in the place where they were invoked, until their expelling, which can be done only by people who know and use the authority of Jesus’ name.

The Bisexual Community Briefing focused on “policy and cultural issues of significance for the American bisexual community.” Spirits focused on the invisible, lethal and destructive.

All of which would be the rantings of a single wacko, and an opportunity for the rest of us to say, "Aww, isn't it cute when you try to make sense?" if it hadn't been for the fact that the story was picked up by Matt Barber in his site Barb Wire.  Barber is a virulently anti-LGBT commentator who got his degree in law from Pat Robertson's Regent University, and is Associate Dean for Career and Professional Development at Jerry Falwell's Liberty University (so he's a twofer, higher-education-wise), and whose site is a go-to place for anyone who is trying to find the latest in hatred, homophobia, and institutional discrimination.

But he also has a huge readership.  So his (perhaps unsurprising) pickup of Servero's Gay Demon Infestation story is giving it much more visibility than it otherwise would have had.  And worse still, the comments section indicates that there are people...

... who believe the whole shebang.

Okay, the readers of Barb Wire are a biased sample.  I get that.  But take a look at what some of the commenters said:

So just what you needed to cheer you up: further evidence that a significant fraction of humanity is insane.  I live in hope that some of this sturm und drang is because of the fact that the election is in three weeks, and it's brought out high emotions in everyone.  Maybe after the dust settles, the lunatic fringe will go back to quietly chewing on the straps of their straitjackets and stop feeling like they need to spew their vitriol all over the place.

If not, it's going to be an ugly, ugly winter.
Posted by Gordon Bonnet at 2:35 AM