I am sick unto death of public school employees proselytizing their students.

And I don't care what exactly you're proselytizing -- a political stance, a religious worldview, an opinion on gay rights or abortion or the legalization of marijuana.  Now, understand what I'm saying here; it is all right to discuss any of those things, as long as it makes sense in the context of the curriculum.

It is not all right to push one specific viewpoint on students.

Public school students are (1) young, and (2) a captive audience.  Furthermore, it is not a venue in which kids are generally taught to stand up to the adults and say, "I disagree with you, and here's why."  So at best the students who hold opposing viewpoints are generally going to be cowed into silence; at worst, they are held up to ridicule or punishment for going against both the authority figure and the majority.

Which is why what happened at a Georgia high school a couple of weeks ago is inexcusable.  Earlier in September Katie Beth Carter, a student at Heritage High School in Ringgold, Georgia, had been killed in an automobile accident.  The varsity football coach, E. K. Slaughter, decided to honor Katie's memory...

... by holding a ceremony and baptizing the entire football team.

Lest you think this was just a non-religious dunk in a water tank -- akin to the "Ice Bucket Challenge" that went around a couple of years ago to raise money for ALS research -- Slaughter's own words to the team should clarify:

Thanks for having the courage to take this step.  We talked the other day — for those who weren’t in our team meeting — I was just sharing with them, you don’t realize characteristics that certain people have until you don’t have them anymore.  And just reflecting over the last week with KB [Katie Beth] and just how loving she was and how servient [sic] she was… This is about you and this is about your relationship with Christ and nothing else, ‘K? It’s a big step for you.

And Katie's brother Jacob, a practicing minister, took the players one at a time and dunked them after saying, "In the name of the Father, and the Son, and the Holy Spirit..." 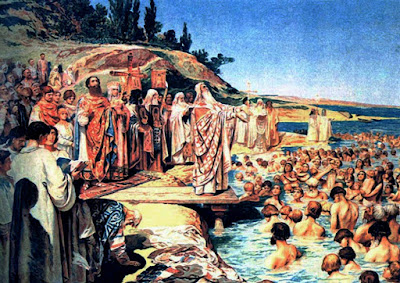 Some religious folks are lauding the coach for taking this step.  If you're one of them, then stop and ask yourself: would you be feeling the same way if the coach had used his position of authority to read to the kids from the Qu'ran or The God Delusion?  Or to lecture them about how important it was to stump for Hillary Clinton?  Or how they needed to write to their congresspersons in support of LGBT marriage rights?

If any of those made you cringe, then don't stand there and claim that you don't understand why proselytizing of any kind needs to be kept out of schools.

And it's not that I want school employees to encourage atheism.  That, too, is proselytizing.  What I'm saying is that none of it has any place in public schools.  There are plenty of venues where kids can be instructed in what to believe about religion, politics, and social issues.  Why are home and church not sufficient?  Why do we need to turn schools into indoctrination camps, and (inevitably) leave some kids feeling as if they're being excluded or demeaned because of their own beliefs?

Fortunately, the Freedom From Religion Foundation has gotten involved, and almost certainly there will be a lawsuit. "Losing a beloved recent graduate is a terrible tragedy and we understand the district community must cope and grieve together," said Liz Cavell, staff attorney for the FFRF.  "But this can and should be done in a way that does not give the clear impression that the school district endorses religion or a particular religion."

Which is it exactly.  Opponents have characterized the FFRF as promoting a secular viewpoint in schools, but that's inaccurate; it is opposed to promoting any viewpoint, secular or religious, to public school students.  Christians would rightly object to their children being told what they should believe, or that their own beliefs are wrong; adherents of other religions, and young people with no religious beliefs at all, should be accorded the same right.

In fact, isn't there something in the bible about "do unto others as you would have them do unto you?"  I seem to remember that part was pretty important.  Maybe Coach Slaughter and his supporters should re-read that part.
Posted by Gordon Bonnet at 2:29 AM