It's understandable that people get upset when the world turns out to work differently than they wanted or expected.  We all have our preconceived notions and our biases, and it can be jarring when those turn out to be false.

It will come as no surprise that I'm once again talking about climate change, a topic on which I have rung the changes so many times that I've lost count.  But I was more or less forced to return to the subject by not one, nor two, but three news stories that appeared one after another over at the r/skeptic subreddit, and which left me seeing red to the extent that I have to pass along the anger to all of my readers.

The first article comes from the Orlando Sentinel, and is called, "Voters Need Truth About 'Clean Coal.'"  Those of you who watched the second presidential debate will no doubt recall that the topic came up with respect to energy policy.  We need to restore mining jobs in places like West Virginia and Pennsylvania, because there's "clean coal" which is environmentally friendly and won't cause all sorts of ecological havoc.

Well, the article calls that out for the nonsense it is in no uncertain terms:


Back in this circumstance called reality, what's actually happened in the energy sector is that much of the world has been moving away from coal for decades. U.S. mining jobs have been mostly in decline since the 1980s...  [T]he U.S. needs to take the threat from air pollution and climate change seriously. If we artificially boost demand for coal simply to put miners back to work, the country will pay through the nose — not only in higher energy costs but in human health and lives.  The toxins produced by burning coal, such as sulfur dioxide, ground-level ozone, heavy metals and particulates, contribute to four out of the five leading causes of death, including heart disease and cancer.

None of those problems go away if we simply refuse to believe in them.  Coal's decline isn't a product of politics; it's a function of chemistry.

Then we had an article in The Guardian entitled "Climate Scientists Publish a Paper Debunking Ted Cruz," responding to a presentation in a hearing run by Senator Ted Cruz in the Senate Committee on Commerce last year.  Cruz had invited climate change denier John Christy to testify (speaking of having an agenda).  And Christy told the senators two things; that mid-tropospheric temperatures were rising three times slower than climate models predicted, and (more damning still) there had been no measurable warming of the troposphere for the past 18 years.

Well, it would be damning if it were true.  Which it isn't.  The study just released was unequivocal:


[T]his recent paper did a few things. First, they took the contrarian argument that the mid-troposphere temperatures have been rising at only 1/3 the rate predicted by models. They found that Christy’s team neglected the contamination of the cooling in the upper stratosphere. When they applied this correction, they found that Christy’s claim was incorrect. Differences between modeled and observed warming rates were much smaller, and had known explanations.

Next, the authors asked whether it is true that there has been no warming in the lower atmosphere (troposphere) in the past 18 years. They found that for five of the six groups that provide satellite temperature analysis, this claim was also incorrect.

Last, we had Representative Ken Buck of Colorado making the statement that talk of climate change was endangering Americans by deflecting their attention away from more important stuff.  "When we distract our military with a radical climate change agenda," Buck said, "we detract from their main purpose of defending America from enemies like ISIS."  He was explaining why he had introduced an amendment to the Defense Appropriation Bill, asking them to cut funding for a directive called "Climate Change Adaptation and Resilience."

The only problem with this, according to an article in the Denver Post, is that Buck's claim is directly contradicting statements issued from the Department of Defense.  Who would, you'd think, know what they were talking about on the topic.  The DoD has said outright that climate change would lead to "prominent military vulnerabilities," that the Department would "need to adjust to the impacts of climate change on our facilities and military capabilities," and that 18 military installations in the United States are directly threatened by sea level rise.

Worse still -- for Buck's claims, anyhow -- is the statement from James Clapper, Director of National Intelligence, who said that climate change is "an underlying meta-driver of unpredictable instability." 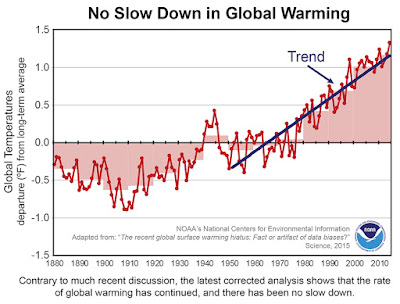 Which is it exactly.  We're perturbing the climate at a rate higher than anything we find in the geological record, and it's no particular surprise that it is responding erratically, and from a human viewpoint, catastrophically.  While no one day of bad weather can be directly attributable to climate change, the pattern we've seen lately of larger storms (and storms taking different tracks than usual), droughts, floods, and other climatic weirdness all adds up to something the climate models have been telling us for years -- that dumping carbon dioxide into the atmosphere in the amounts we've been doing for the past hundred years is causing huge climatic changes that may already be beyond our powers to mitigate.

But back to my original point.  I can understand the desire by Cruz, Buck, Trump, and others for the world to be other than it is.  Hell, I get why the coal miners are upset; their jobs are vanishing.  But there are bigger issues at stake here, like the long-term habitability of the planet, and (in the short term) environmental devastation that could compromise the living space and agricultural production for millions of people.

So very sorry that the world doesn't conform to your desires.  That's true for many of us, and the appropriate response is, "Tough shit."  Part of being an adult is facing up to it when things aren't the way we want them to be, not stomping our feet, clinging to our invented version of reality, and saying, "But I want it this way!"  Climate change exists, whether we want it to or not, and the effects are increasingly looking catastrophic.  Best we stop trying to push an agenda based on our desires and tackle the problem head-on.
Posted by Gordon Bonnet at 3:09 AM