Looking for a job with excitement and travel opportunities?  Do I have news for you!

Of course, there are a couple of downsides.  These include (1) you most likely have to become a Catholic priest to be eligible, and (2) it requires you to commit yourself to fighting bad guys who almost certainly don't exist.

What I'm referring to is an urgent call that was issued last week by a spokesman for the Vatican regarding a drastic shortage of exorcists.  The announcement was made by Valter Cascioli, who is the "scientific consultant" for the Vatican-endorsed International Association of Exorcists, which in my mind is a little like being the "reality consultant" for Looney Tunes.  Cascioli, we find out, also teaches a course in exorcism at the Pontifical University of Regina Apostolorum in Rome.  This makes me wonder if there's a required lab class that goes along with the course.  Do you get graded on how thoroughly squelched the demon is after you exorcise it?  Do you get points off if your subject is eventually, as it were, repossessed?

Be that as it may, Cascioli takes the whole thing pretty seriously.  "The lack of exorcists is a real emergency," he said in an interview with the Italian newspaper La Stampa.  "There is a pastoral emergency as a result of a significant increase in the number of diabolical possessions that exorcist priests are confronting.  The number of people who take part in occult and satanic practices, which lead to serious physical, psychological and spiritual damages, is constantly rising." 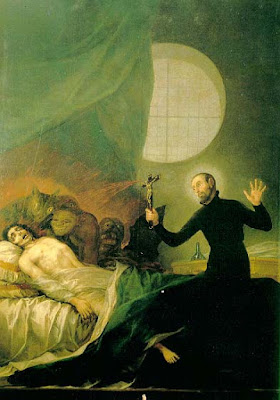 Amongst the difficulties I see with the whole concept of possession is that you'd think an atheist like me would be a sitting duck with respect to demonic attack.  I mean, I don't do all of the Vatican-approved things to protect myself, e.g. wearing a crucifix, making the sign of the cross, praying, and sprinkling myself with holy water.  And yet, here I sit, neither turning my head a full 360 nor puking up pea soup all over my computer.  In fact, atheists never seem to be the victims of demonic possession -- it's always people who believed in the devil and all of his assorted pals in the first place.

This doesn't seem to occur to Cascioli, however.  In fact, he says, "There is a broad spread of superstitious practices, and with that a growing number of requests for help from people who are directly or indirectly struck by evil.  It is dangerous to underestimate a phenomenon that is caused by the direct actions of the devil, but also by a decline in faith and values."

Note that Cascioli attributes the rise in the demand for exorcisms with the "spread of superstitious practices," which is true, but not for the reason he thinks.

In fact, Cascioli thinks that exorcist training programs need to be expanded dramatically.  "There doesn’t exist a training institution at university level," he says.  "We need an interdisciplinary approach in which science collaborates with religion, and psychiatrists work with demonologists and exorcists."

Nevertheless, Cascioli is getting a lot of support from his fellow demon-eviction squad.  Father Vincent Lampert of the Archdiocese of Indianapolis, who is called "America's top exorcist" and whose activities have been featured on the television show Paranormal Witness, concurs with Cascioli's call for more exorcists.  "We’re gaining all sorts of knowledge, but there’s still that emptiness within us that is being filled with addictive behavior such as drugs and pornography," Father Lampert said.  "The decline in faith goes hand in hand with the rise in evil."

Well, all I can say is that if pornography led to demonic possession, the vast majority of single males (and a good many of the married ones) would be possessed.  In fact, it's hard to imagine the demons keeping up with the demand.

In all seriousness, the whole thing strikes me as kind of dangerous.  Not the demons, but the exorcists themselves.  How many people who are mentally ill -- especially schizophrenics and people with panic and anxiety disorders -- have been frightened by the combination of their experiences and the superstitious nonsense being thrust upon them into undergoing an exorcism rather than seeking legitimate medical attention?  Despite Cascioli's confidence that he can tell the difference between a mental illness and demonic possession, I'm unconvinced.

Of course I would be, given that I don't think demons exist in the first place.  But still.  The idea that some poor tortured soul would seek out an exorcist rather than getting help from a doctor is appalling.

So there you have it.  Today's dip in the deep end of the pool.  Myself, I can only hope that the shortage of exorcists isn't because the demons have been busier, but because belief in this dangerous superstition is on the decline.  The fact that there are still people like Cascioli and Lampert around is indicative of the fact that we're not fully in the 21st century yet -- but perhaps we're moving in the right direction.
Posted by Gordon Bonnet at 2:23 AM