Send in the clowns

According to an article last week in the Boston Globe, Loren Coleman, the founder and director of the International Cryptozoology Museum in Portland, Maine, has been called into investigate the recent rash of clown sightings in the United States. 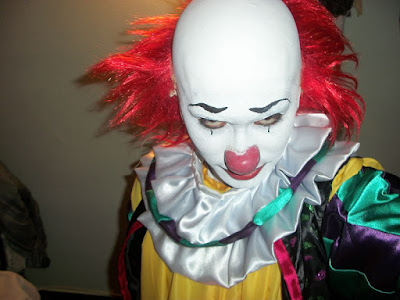 [image courtesy of the Wikimedia Commona]

I'm not entirely sure what to think about this.  First, despite the fact that the museum has been in operation since 2003, in that time they have demonstrated conclusive evidence of the existence of almost one Sasquatch.  The same goes for all of the other cryptids they study, such as the Loch Ness Monster, the latest sighting of which turned out to be a bunch of seals. 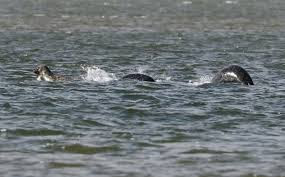 So their track record isn't that great.  Also, I question that scary clowns actually qualify as cryptids, given that no one is really doubting they exist.  Most of us think they're pranksters (or possibly loonies) dressed up in clown suits to scare the piss out of the unsuspecting, and as such are more a concern for local law enforcement than they are for the crew of Finding Bigfoot.

That hasn't stopped people from seeking out Coleman's help. "Everybody [has] jumped on the phantom clown bandwagon," he said in an interview with the Globe.  "I’m always prepared for the next new thing.  It’s a very crisis-oriented field that I [work] in — it could be a new animal discovery, a new Bigfoot report, a new giant snake report... That’s just the way life is."

So I guess he's saying if it wasn't clowns, it would be something else.  Which I can't really argue with.

Me, I'm tired of the whole clown thing already, but unfortunately Coleman says he expects the number of sightings to "increase until Halloween and diminish thereafter."  Part of my annoyance with the phenomenon stems from the fact that our school got put on lockout last week because of a threatening clown-related Instagram page.  The whole thing was completely exasperating, mostly because I spent the day answering clown-related questions instead of talking about aerobic cellular respiration, which (trust me on this) is way more interesting.  So far, there have been no actual clown sightings in our village, at least that I've heard of, but as Coleman correctly points out we still have almost three weeks till Halloween, so there's lots of time for them to make an appearance. 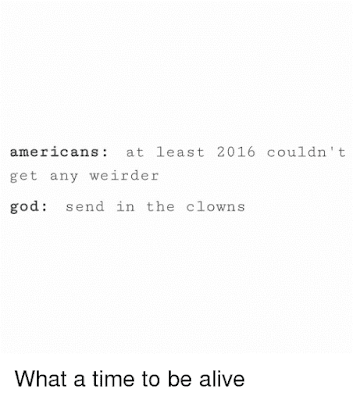 So it's all generated quite a stir.  The Twitter hashtag #IfISeeAClown has been trending for days, and the account @ClownSightingsOnTwitter has gained 335,000 followers in three weeks.  (Which made me say, and I quote, "What the fuck?", as I have struggled for three years to get 2,600 followers over @TalesOfWhoa.  Maybe I need to dress in a funny costume or put on enormous shoes or something.)

The police are taking the phenomenon seriously, in spite of the fact that there hasn't been a verified case of a clown actually attacking anyone.  Mostly they seem to just stand around looking sketchy.  (The clowns, not the police.)  That's enough, though, for Wayne County (New Jersey) Police Chief Laurence Martin.  "If anything is suspicious," Martin told Reuters, "anything, be it somebody verbally or physically acting menacing in any type of costume, notify the police right away."

Which, I suppose, makes sense.  Better safe than sorry.  So perhaps enlisting Loren Coleman is the right idea.  If in 13 years he's yet to find one Bigfoot, maybe he'll be equally adept at making sure no one sees any clowns.
Posted by Gordon Bonnet at 2:07 AM