Speak of the devil

Just because I keep hoisting the banner of rationalism here at Skeptophilia doesn't mean I don't get pretty freakin' discouraged at times.

I suppose it's an occupational hazard.  My spending hours daily seeking out the most bizarre examples of irrational behavior I can find, so I have something to write about, means that inevitably I'm going to come to the conclusion that humanity is pretty much screwed.  It's like people who become addicted to shows like CSI and Cops and Law and Order.  At some point, you're pretty certain to decide that the world is full of criminals who are trying to kill you and get away with it.

So it's an effort at times to remain optimistic.  Especially given stories like the one over at Fusion a couple of days ago describing a poll taken in North Carolina wherein 41% of Donald Trump supporters said that Hillary Clinton is literally the devil.

As I've said before, I'm not here to discuss whether or not you agree with Clinton's politics.  But the idea that 41% of Trump supporters think that his opponent is the incarnation of Satan on Earth is troubling, to say the least. 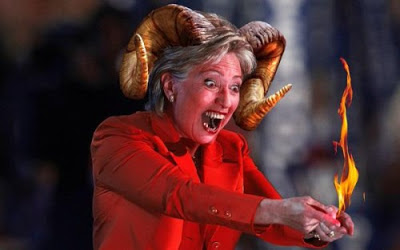 That, however, is not the strangest thing about the poll.  Apparently, of the currently undecided voters, 15% thought Clinton was the devil.  So I'm thinking: You believe one of the candidates is literally the Prince of Hell (or Princess, in this case), and you're undecided?  What are you planning to do, stand there in the voting booth and say, "Let's see: candidate who is Satan, candidate who is not Satan... how to choose, how to choose?"

The weirdest thing, though, is that on the poll there were three choices: (1) Clinton is the devil; (2) Clinton is not the devil; and (3) Not sure.  And of the people who say they're voting for Hillary Clinton, 6% of them said they were not sure if she was the devil or not.

Now, I realize that this may be because 6% of the respondents thought the question was funny enough that they decided to fuck around with the results.  Or, perhaps, that this represents the 6% of respondents who are actual practicing Satanists, who think that Clinton might be the devil and are happy about it.  But if you look at the results, you will find that 33% of undecided voters are also undecided about whether Clinton is Satan.

So there are people in North Carolina (a lot of them, apparently) who when asked, "Who are you voting for?" said, "I dunno," and when asked, "Is Hillary Clinton the devil?" said, "Um... I dunno about that either."

Some days I feel like I've side-slipped into a bizarro world where this kind of stuff is normal.  Because this isn't the only insane thing that's happened lately.  When a map came out showing that if only men voted, Donald Trump would win, his followers immediately started calling for repealing the 19th Amendment, with one woman saying she would "give up [her] right to vote to make this happen."  Then we had a completely surreal video of Alex Jones making the rounds, wherein he bursts into tears on air and says that not only is Clinton a demon, so is Obama, adding that if you vote for Clinton you're "electing President Linda Blair."

I dunno, President Linda Blair could probably get stuff done, don't you think?  If Mitch McConnell stonewalled President Linda Blair, she could just puke up some pea soup on him.  "Oh, you won't give my Supreme Court nominee a fair hearing?  Well, take this!"  *BARRRRRFFFFF*

At least it would make C-Span more interesting.

So I guess we rationalists have a way to go, and it's an uphill battle.  I'm not ready to give up any time soon, so if you are a loyal reader, no worries: I still have a few posts left in me.  But it'd be nice if we could make more headway in convincing people not to engage in insane magical thinking.

Although it would make it harder for me to find material.  So I suppose I should be glad, in a backhanded way, that these people are keeping me in business.
Posted by Gordon Bonnet at 2:06 AM