I swear, the conspiracy theorists are getting faster these days.

In the past, it seemed like they'd at least wait until the dust settled from the latest catastrophe before claiming that it was (1) a hoax, (2) set up by the government as a "false flag," (3) engineered by the Illuminati, or (4) all of the above.  But now, thanks to the internet, we can conclusively state that light is the fastest thing in nature, but bullshit comes in at a close second.

This all comes up because we're already beginning to hear loony theories about Hurricane Matthew, which pummeled Haiti and Cuba, slammed the Bahamas, and is currently ripping its way up the Florida coast (with a potential afterwards for making a weird loop out in the Atlantic and hitting Florida for a second time).  Certainly its track has been odd -- I can't remember ever seeing a hurricane in the southern Caribbean make a ninety-degree right-hand turn the way this one did.

But there's a lot we don't know about steering currents, the prevailing winds that move storms around.  We're getting far better at predicting them -- which is why our ability to forecast storm tracks has improved dramatically in the past thirty years -- but it's still far from an exact science. 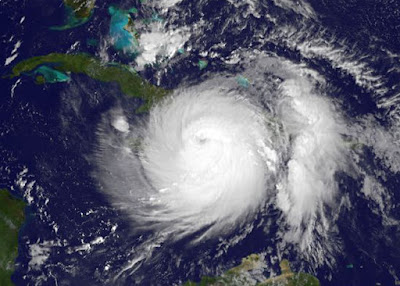 All of which leaves open a gap for the nutjobs to crawl through.

First, we have online media commentator Matt Drudge, who never misses an opportunity to use human suffering to hammer home his ultra-right-wing views, claiming that the people at NOAA are overplaying the severity of the hurricane to "make an exaggerated point on climate."  The ironic thing about this is that given the fact that we just had our umpteenth-in-a-row month of record-setting heat, I'd say the climate is making the point for itself.  But silly things like facts don't discourage Drudge, who is already saying Matthew is "a fizzle" and is not going to live up to the forecasters' dire predictions.

Then Rush Limbaugh jumped into the fray, claiming that not only is Matthew not going to live up to the expectations, but that hurricanes in general are a liberal conspiracy.  "It’s in the interest of the left to have destructive hurricanes because then they can blame it on climate change, which they can desperately continue trying to sell," he said on his radio show this week.

So apparently all the left has to do is to make up stuff, and it becomes real.  I bet the Democrats are going to be tickled that they have this much magical power.  All they have to do is wave a wand and say "Hurricanus manifestum!" and lo and behold, we have a storm.

Maybe they should try "Anncoulteria shutthefuckuppibus" and see what happens.  I know I'm willing to try it.

Anyhow, just because Drudge is an asshole and Limbaugh is a moron is not to say that Matthew hasn't been an odd storm.  Not only has it taken a weird path, as I mentioned earlier, but it strengthened really quickly, blowing up to category 4 only a day after it took its northward turn.  So it will come as no surprise that we're already hearing about how the odd features of Matthew are because it's...

... not an ordinary hurricane.

This alarming news comes from one Dr. Ethan Trowbridge, who is called a "leading climatologist" over at the website Someone's Bones despite his pronouncements making me wonder if he's been doing sit-ups underneath parked cars.  Trowbridge, who appears to be unclear on the process of hurricane formation, attributes Matthew's ferocity to the close approach of the planet Nibiru (I bet you thought we were done with the Nibiru horseshit.  Ha, fooled you, didn't I?).  According to Trowbridge, some bizarre and hitherto-unknown physics is allowing the mysterious tenth planet to stir up hurricanes:


Nibiru is producing latent heat on our planet.  And this has a positive correlation on weather patterns currently being experienced on Earth.  There are a lot of things the public is not being told, that can influence this storm’s trajectory. Many things factor into this...

Nibiru is annihilating Arctic sea ice, and its proximity to our inner solar system is pulverizing and altering atmospheric conditions across the globe.  Greenland, for example, has lost much of its polar ice, causing the region to darken; the consequences allow solar radiation—from both the sun and Nibiru—to permeate the atmosphere, warm the Earth’s oceans, and destabilize the planet’s crust.

These are dangerous times.  What happens in the Arctic impacts the world.  This is known as the ‘carbolic effect,’ a concept the USGS and its affiliates keep hidden from the public.  Greenland has reached its carbolic point, and now Nibiru’s presence is influencing weather all over the planet. Hurricane Matthew is the latest example, and Nibiru is the cause.

The author of the article tells us that Dr. Trowbridge is "now in exile," which I suppose is nicer than saying "was laughed out of the scientific establishment."

As if this wasn't bad enough, we then find out from an entirely different wackmobile that Hurricane Matthew is a "weaponized storm" meant to blast America for "rejecting globalist, totalitarian rule." The proponent of this theory (if I can dignify it with that term) is one Steven Quayle, who goes on to tell us that HAARP is involved (of course), the whole idea was dreamed up by the Illuminati (of course), and the fact of its being named "Matthew" is significant because of the "Biblical associations... and obvious prophetic implications."

Which makes perfect sense, given the well-known biblical books the "Gospel of Katrina" and the "Letter of St. Wilma to the Louisianians."

And this isn't even taking into account the fact that HAARP closed two years ago, and even if it was still operational and could do what Quayle claims it can do, it only seems to be able to generate hurricanes in areas that always get hit by hurricanes anyway.

Now if HAARP could generate a category-5 hurricane in, say, North Dakota, I'd be impressed.  But south Florida?  Not so much.

So the damn thing is still out there churning, and already the loonies are trying to tie it into their warped worldview.  Which, I suppose, shouldn't be surprising.  In any case, enough about the lunatic fringe; I'll just end with a wish for all of those in harm's way from this storm to remain safe -- whatever its ultimate cause was.
Posted by Gordon Bonnet at 2:07 AM