The hexagons of doom

New from the Woo-Woo Bullshit That Would Not Die department, we have: stories popping up all over the place claiming that the discovery of hexagonal clouds "solves the mystery of the Bermuda Triangle."

There are dozens of these articles all over the place, many at clickbait sites like the Daily Mail Fail, so I will only post one link -- to a dubiously-less-clickbaitish site called the Mother News Network.  In it, we find that a meteorologist named Randy Cerveny has been studying atmospheric turbulence patterns, and found that a phenomenon that creates hexagonal-shaped clouds is also likely to create the proper conditions for a microburst -- a sudden downdraft that can reach hurricane-speed in a matter of seconds (and usually dissipates just as fast).  "These types of hexagonal shapes over the ocean are in essence air bombs," Cerveny said.  "They are formed by what are called microbursts, blasts of air that come down out of the bottom of a cloud and then hit the ocean and then create waves that can sometimes be massive in size as they start to interact with each other." 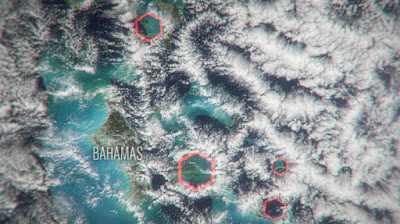 Which is all well and good, and of obvious interest to weather nerds like myself.  I'm fascinated by weather, which is why I'm always updating my poor long-suffering wife about the status of low-pressure systems in Saskatchewan.  So I think the discovery is cool.

You may want to back slowly away from your screen, 'cuz I'm gonna yell.

THERE IS NO SUCH THING AS "THE BERMUDA TRIANGLE PHENOMENON."

I dealt with this in a post way back in 2011.  Let me quote for you the relevant paragraph:


[T]he whole preposterous idea [of the Bermuda Triangle] was brought to the public's attention by a fellow named Charles Berlitz, who wrote a bestselling book on the subject in 1974.  Berlitz's book, upon examination, turns out to be full of sensationalized hype, reports taken out of context, omitted information, and outright lies.  Larry Kusche, whose painstaking collection of data finally proved once and for all that there were proportionally no more ships and planes going down there than anywhere else in the world, said about Berlitz, "If Berlitz were to report that a ship was red, the chances of it being some other color is almost a certainty."

So the Bermuda Triangle Mystery is actually the Bermuda Triangle Ordinary Patch Of Ocean.  But far be it from the woo-woos of the world to say, "Well, I guess we were wrong after all.  There's nothing to see here, folks."  No.  We have to keep hearing about how ancient aliens built the Pyramids, that ley lines determined the siting of Stonehenge, how you can heal yourself with crystals, and that homeopathy works.

And, heaven help us all, that there's a mysterious "Bermuda Triangle" where ships and airplanes vanish regularly, never to be seen again.

So poor Randy Cerveny has joined the rank of scientists who have had their legitimate (and interesting) research co-opted by wingnuts who then use it to support a loony claim.  I don't know how he feels about this.  Maybe he's just laughing it off.  Me, I'd be pissed.

In fact, I'm pissed enough just reading about it.  I better go check the weather forecast for Quito, Ecuador and calm down a little.  It'll also give me something to tell my wife about over dinner tonight.
Posted by Gordon Bonnet at 2:08 AM