This all comes up because of a Skeptophilia frequent flier, namely Alex Jones, who in the last few weeks has been ranting about something called "Pizzagate."  Which brings something else up, namely the fact that the media's tendency to turn anything into a scandal by adding "-gate" to the end of it really grinds my gears.  This annoys me almost as much as Alex Jones does himself, which is saying something, because if I had to choose between a root canal and listening to an entire episode of InfoWars, I'd choose the root canal because at least then I'd get some good drugs to help me through the experience. 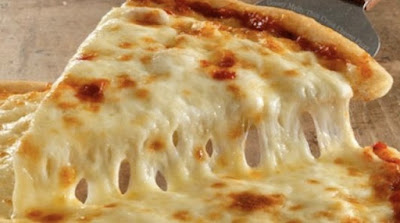 Anyhow, "Pizzagate" is the insane idea that Hillary and Bill Clinton and various other influential people in the Democratic Party are using the Washington D. C. pizza joint "Comet Ping Pong" as a front for pedophilia and satanic rituals.  At first, the owner of Comet Ping Pong, James Alefantis, tried to go online and defend himself from the allegations, but I'm sure you can predict how successful that was.  The message "Don't let up.  #PIZZAGATE Everywhere!" was posted on Twitter and got thousands of likes and reposts.  "It was like trying to shoot a swarm of bees with a gun," said Bryce Reh, Comet's general manager, who was nearly pushed into quitting his job because of harassment and death threats.

Then Alex Jones got involved.  He posted a "special message" on his website about how serious Pizzagate was, and the horrible the things they were covering up.  "InfoWars and the Pizzagate investigators are just trying to uncover the truth," he said.

Jones, of course, gets not thousands but millions of views, so suddenly the whole thing exploded.  And a couple of days ago, a guy showed up at Comet Ping Pong with an assault rifle, saying he was there to "do some investigating of Pizzagate" for himself.  He fired off at least one, possibly more, shots, but thankfully no one was injured.

The attacker, Edgar Maddison Welch, said that he heard about the pedophilia ring from Alex Jones and decided he needed to do something about it.

Poor James Alefantis, of course, is just trying to keep a business he's sunk ten years of his life into building from tanking.  "I really hope that all of these people fanning the flames of this conspiracy would take a moment to contemplate what has gone on here today and maybe to stop," he said.  I hope so too, but from experience, I can tell you that once conspiracy theorists latch on to an idea, they never give up.

So a lot of wacky beliefs are harmless, but they establish a pattern.  You stop asking questions, you start trusting purveyors of bullshit like Alex Jones, and all of a sudden you move from "odd but not a problem" to "possible incitement to do some serious damage."  And that's why I spend so much time railing against the woo-woos -- even those who, on the surface, seem pretty innocuous.

I'll keep after the big stuff, too.  As you know if you have read this blog for any length of time, I'm not one to suffer in silence.  But the small stuff and the low-hanging fruit deserves some attention too, from time to time.  As the adage goes, "A journey of a thousand miles begins with a single step."  And that applies whether you're headed to someplace nice, or CloudCuckooLand.
Posted by Gordon Bonnet at 1:53 AM