For today's topic I owe a hat tip to my friends over at the Society for Psychical Research.  The SPR is a group of people interested (as I am) in claims of the paranormal, and who approach the topic in exactly the right way -- looking at evidence, veracity, and overall logical consistency as the best way to sort the grade-A beef from the bull's other, less appealing product.

As an example of the latter, a couple of days ago they posted a link to the site The Week in Weird wherein we find out about a device someone's invented that is supposed to "blast unwanted paranormal entities out of your home."  The Thailand-based company Super Boondee is selling the "Trisaskri Ghost Repellent," which is supposed to work as follows:


When you’re ready to clear your home of negative entities, you simply flip the switch on the Ghost Repellent box, which activates a low-level electromagnetic field, condenser microphone, and infrared camera that work in unison to detect paranormal activity.  Super Boondee calls this the “phenomenon receptor”.  When the machine detects an anomaly, it automatically fires off a “Wave Killer” radio blast that they claim is enough to force the nasty phantom to abandon its chosen haunt.  Much like those sonic-rodent repellents, the box will simply continue to drive off ghosts no matter how many times they attempt to return.

Because hard-headed skeptics like me always want to know how the thing does what it's supposed to do, I was pleased to see that "Super Boondee" even provided us with a helpful schematic diagram:

Okay, my first question is: what the hell is an "inaudible receptor?"  Not to mention a "phenomenon receptor?"  I have a B.S. in physics, which doesn't make me an expert or anything, but at least I'm fairly confident that I know more about physics than the average guy on the street.  And what this schematic looks like to me has about as much scientific validity as the explanations you hear from Geordi LaForge about how he can't beam up the away team until he realigns the force phase energy conduits so that they are synchronized with the warp field frequency interfaces, which will take at least until right after the last commercial break to fix.

Here's a close-up of what the inside looks like: 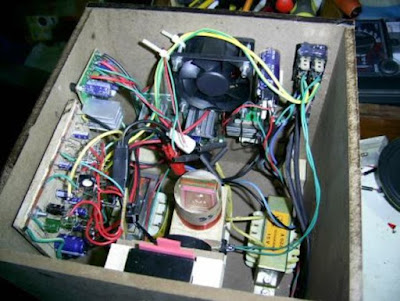 So that's pretty impressive.  Colorful wires hooked to stuff, so it has to work, right?

If you're wondering how much it would cost to purchase one of these ghost-chasers to test for yourself, wait no longer: one can be yours for only $1,500, plus another $140 for overseas shipping.  My own opinion is that I can think of many better uses for $1,500, which include using it to start a fire in my wood stove.  I try to remain open-minded and all, but from what I've seen this has "ripoff" written all over it.

But by all means, if you want to put the "Trisaskri Ghost Repellent" on your Christmas wish list, go for it.  And please let me know if you tried it, and whether you got any results in the form of ghosts fleeing from your house like rats from a sinking ship.  My natural state is usually to scoff, but there's nothing that succeeds like success.

And do let me know what an "inaudible receptor" is.  I'm figuring it's sort of the auditory version of a camera designed to take photographs of invisible stuff, but I could be wrong about that.  It certainly never came up in any of my college physics classes.
Posted by Gordon Bonnet at 2:01 AM