It goes without saying that advertisers will do or say damn near anything to sell their products, but every once in a while a marketing campaign will backfire.  That happened this week -- and surprisingly, because enough people knew enough science to call bullshit on the claim.

The company was Hunt's, maker of ketchup and various other tomato-based products.  They launched a campaign to inform customers that they were not using GMO tomatoes, and created a commercial to tell everyone about it.  "No matter how far afield you look, you won’t find a single genetically modified tomato among our vines," the video announcer says proudly.  The camera then pans across a field of tomatoes, and the announcer says, "No GMOs in sight." 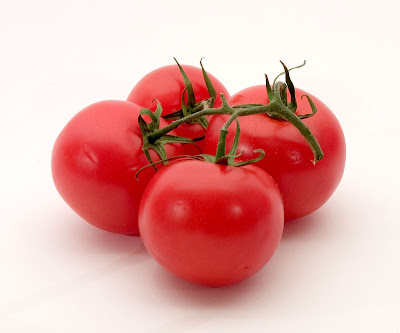 The problem is, there are no GMO tomatoes being grown anywhere in North America or Europe.  The only GMO tomato that was ever widely available was the slow-ripening "Flavr Savr" cultivar, which peaked in numbers in 1998 and a few years thereafter completely disappeared from commercial farms.  Since then, no GMO variety of tomato has ever reached the market or even been grown outside of research laboratories.

So the claim by Hunt's would be equivalent to Evian bragging that they sold only gluten-free sparkling water.  Even if there was reason to believe that GMO tomatoes had negative health effects, which they don't.

Fortunately (miracle of miracles!) the company was immediately called out on their ridiculous announcement.  One person wrote on the Hunt's feedback website, "It's terribly unfortunate you're lying to consumers, Hunt's.  GMO tomatoes are not available to the market and yet you're implying they are."  Another was even more blunt: "Way to go, Hunt's - jump on the anti-science band-wagon in order to bilk a premium from some rubes.  What's next?  Homeopathic ketchup?  I guess it's Heinz for me from now on...  I like Heinz anyway.  And science.  No fearmongering with my fries, thanks."

Of course, the underlying problem is twofold.  First, the vast majority of GMO products have been safety-tested to a fare-thee-well, and have been shown completely safe (despite the alarmist claims that get flung about periodically).  Second, we've been tinkering with the genes of both animals and plants for millennia, only doing it by selective breeding rather than direct DNA manipulation -- and we've yet to produce a crop that directly causes autism or cancer or birth defects or any of the other wild claims you hear.

And, of course, there's a third problem that is recognized less often -- that there have been direct benefits of some GMO crops that extend well beyond providing revenue to Monsanto.  GMO virus-resistant papayas saved the crop from being destroyed into commercial irrelevance by the ringspot virus; if you've eaten papaya in the United States, you've eaten a GMO.  It's hoped that a fungus called "black sigatoka" that is threatening the Cavendish banana (by far the most common cultivar) with extinction can be handled the same way; likewise the world's orange crops, under attack by huanglongbing (citrus greening disease).  Selective breeding is too slow, and requires the location of resistant strains to breed into the population -- impossible with the banana, which has no seeds and is reproduced by asexual means only, and very slow with the orange, which takes ten years or more from seedling to fruit.  Without GMO techniques, we might be enjoying the last generation of bananas and orange juice with our breakfast.

The anti-GMOers, however, are far more responsive to wild claims and fear talk than they are to facts, and every time any genetically modified crops are introduced, we undergo another round of panic.  I was pleasantly surprised, however, to see the response to the Hunt's claim.  Pinned to the wall by the facts, the company had to respond.  A spokesperson for ConAgra, which owns Hunt's, said the following:


Many people are interested in what's in their food, and we want to provide them the information they are looking for.  As a company, ConAgra Brands believes in giving people choice by offering foods that are made with and without GE ingredients.

While it’s true that all tomatoes are non-GMO, there are tomato products that contain GE ingredients.  We recently updated many of our Hunt’s tomato products including diced and crushed to meet Non-GMO Project Verification standards, so look for the seal at shelf.

However, it's apparent that ConAgra and Hunt's isn't fooling anyone, any more than Evian would if they implied that only their sparkling water was gluten-free.  Amazingly enough, science for the win.

As for me, I'm going to go have another cup of coffee.  Made entirely without using spent nuclear reactor fuel.  Make sure you're safe -- demand that your coffee is certified plutonium-free.
Posted by Gordon Bonnet at 3:02 AM