Making the world safe for meerkats

This past weekend my wife and I put up our Christmas tree.  It's always a special moment for me -- we have ornaments collected from years ago (including one given to my son Lucas on his first Christmas), ornaments we've made, ornaments we've collected on trips to various places.  We went a little crazy on the lights this year, but I think it's pretty doggone festive. 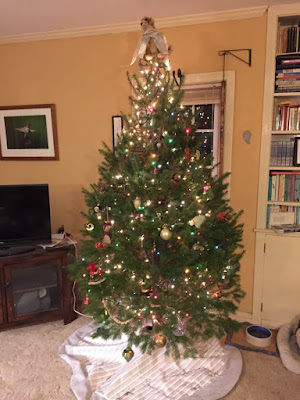 In case you're wondering, yes, that is a stuffed meerkat on the top of the tree.  The one thing we've never been able to agree upon is a good tree-topper, so we've started the tradition of using our stuffed meerkat in the place of the traditional star.  Unfortunately, in the tiny, underdeveloped brain of our hound, Lena, the search parameters "fuzzy" + "in a tree" results in the answer "squirrel," so she spends an average of two hours a day staring at the meerkat waiting for it to move.

Anyhow, this all comes up because a couple of days ago, Corey Lewandowski, Donald Trump's former campaign manager, was interviewed on Fox News by Sean Hannity, and said, "America is in store for a great Christmas, which you can say again, ‘Merry Christmas,’ because Donald Trump is now the president, you can say it again, it’s okay to say, it’s not a pejorative word anymore."  This hit the news at almost the same time as did a Pew Research Group poll that found that half of all Americans say that discrimination against Christians is as bad as that against minorities; this number rises to 75% if you just poll Trump supporters, and 80% if you only count white evangelical Christians.

My first question upon hearing this was to wonder what the hell these people are smoking.  Then I amended that to wondering if any of the people who answered that way have ever actually talked to a minority about what they experience on a daily basis -- the kind of prejudice and bigotry, explicit or implicit, minorities live with every day of every year.

My guess is no.  Because that would require peeking outside their comforting shell of Being Right About Everything, which apparently comes with the added feature of Fearing Anyone Different.  These people are mistaking their no longer having unquestioned hegemony with discrimination, a difference that pretty much any member of any minority would be happy to explain.

The problem is, the white Protestant Christians have for two hundred years run damn near everything, to the point where if you weren't a white Protestant Christian, your chance of being elected to public office was just about zero.  (An exception is my home region of southern Louisiana.  There, you could also be elected if you were Catholic.)  Thankfully, things are changing, albeit slowly -- even in some of the most conservative parts of the country, there are minorities and people of other religious beliefs (and no religion at all, although that's still uncommon) being elected.

But this is profoundly terrifying to some people.  (Not all, as I hasten to point out, and upon which I will elaborate in a moment.)  But there are people for whom this is so frightening that they invented some convenient myths -- that liberals in general and atheists in particular are trying to outlaw saying Merry Christmas, that electing non-Christians means that the first thing they'll do is tear down the churches and make saying "Jesus" a capital offense.  Of course, this is ridiculous; even the most atheistic of atheists (me, for example) couldn't care less if you say Merry Christmas, have Christmas displays in your yard so bright they disrupt air traffic, and go to church twice a day every day of the year.  We don't care what you do with your life, we only care when you start telling others what they have to do with their lives, and also when you use taxpayer dollars to fund religion.

Odd, isn't it, that it's not generally the atheists who have problems with how people greet each other during the holiday season -- we're usually content to respond in kind, and take a friendly greeting as friendly instead of as some kind of insult to the core of our beliefs.  100% of the squealing I've seen about who says what to whom, holiday-wise, has come from staunch Christians.

I'm overgeneralizing, of course, because there are obnoxious atheists just as there are obnoxious people of every other stripe.  Also, some of my Christian friends are outspokenly in favor of everyone following their own star regarding what they believe and how they observe it.  But people like Lewandowski make everyone look bad -- he makes the evangelicals seem like they're only content when they're running the show, and the atheists sound like they'd be thrilled to turn Rudolph the Red-nosed Reindeer into venison cutlets.

Which explains the results of the poll.  The sad part is that this sort of rhetoric will do nothing but reinforce the rifts we already have -- especially awful given that it's based on a falsehood.

So that's pretty depressing.  Me, I think I'm going to go try to cheer myself up.  Maybe I'll sit on the floor next to Lena and stare at the Christmas Meerkat.  It certainly seems to make her happy.
Posted by Gordon Bonnet at 2:10 AM