Ridicule to the rescue

Well, if you needed any good news, a study released last week in Frontiers in Psychology found that both rational argument and ridicule can reduce people's belief in conspiracy theories.

The research, done at the Eötvös Loránt University of Sciences in Budapest, was conducted by psychologists Gábor Orosz, Benedek Paskuj, István Tóth-Király, Beáta Bőthe and Christine Roland-Lévy.  The authors write:


Conspiracy theory (CT) beliefs can be harmful.  How is it possible to reduce them effectively?  Three reduction strategies were tested in an online experiment using general and well-known CT beliefs on a comprehensive randomly assigned Hungarian sample (N = 813): exposing rational counter CT arguments, ridiculing those who hold CT beliefs, and empathizing with the targets of CT beliefs.  Several relevant individual differences were measured. Rational and ridiculing arguments were effective in reducing CT, whereas empathizing with the targets of CTs had no effect.  Individual differences played no role in CT reduction, but the perceived intelligence and competence of the individual who conveyed the CT belief-reduction information contributed to the success of the CT belief reduction.  Rational arguments targeting the link between the object of belief and its characteristics appear to be an effective tool in fighting conspiracy theory beliefs.

Well, I don't know about you, but that cheers me up immensely, especially given that here at Skeptophilia I seem to split my time evenly between arguing rationally and lobbing ridicule bombs at people who hold wacky beliefs.  Some days it feels like I'm shouting in a windstorm, and that nothing I'm doing is having the least difference.  It's heartening to find that this may not be true. 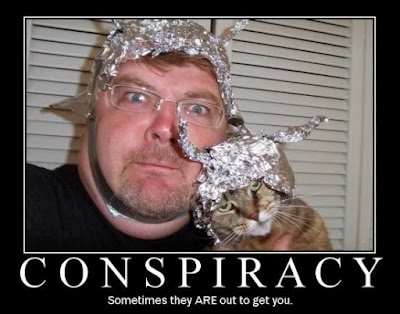 Peter Kreko, visiting professor from Indiana University and co-author of the study, was interviewed over at PsyPost and had some interesting perspectives on the study.  An important distinction, he said, is that the research supports ridiculing the conspiracy theories themselves and/or the sources of such theories, but that ridiculing the person you're talking to is not likely to work.  In fact, it can generate the backfire effect -- being attacked because of beliefs people feel strongly about can result in the True Believers doubling down on their certainty.

"Our findings go against the mainstream of the communication literature and 'common wisdom,' as well as the current affective wave of social psychology emphasizing that emotions constitute the most important factor behind shaping beliefs and attitudes," Kreko said.  "Despite the general assessment that we are in a 'post-truth' world, truth and facts do matter when it comes to refuting conspiracy theories.  Uncovering arguments regarding the logical inconsistencies of conspiracy beliefs can be an effective way to discredit them."

And working to discredit them is important, Kreko says. "Conspiracy theories can be extremely harmful, they can lead to the persecution of groups. For examples, the Protocols of Elders of Zion, a conspiracy theory fabricated in the early 20th century on the Jewish leaders’ plot to rule the World, played an important role in the ideological justification of the murders of the Holocaust.  Anti-science conspiracy theories are often similarly dangerous – the anti-vaccination movement is a good example.  Several hundreds of thousands of people are estimated to die each year as a consequence of non-vaccination.  Given all of these negative impacts of conspiracy theories, it is essential to have evidence-based studies on how to reduce the popularity of such theories."

To which I can only say, "Amen."  Also that I'm really happy this study was published when it was, because heaven knows most of the news lately has been bad.  Gives me incentive for continuing to write what I do six times a week.
Posted by Gordon Bonnet at 4:33 AM