You would think that after this many years of writing Skeptophilia, I'd be completely inured to weird ideas, that nothing would shock me.  But I still occasionally run into a claim that leaves me saying, "Um... uh.  Um.  Nope, I got nothin'."

That happened yesterday, when a loyal reader sent me a link to the website of the Spiritual Science Research Foundation.  The website subheader is "Bridging the Known and Unknown Worlds," so I was at least on guard that I was entering the realm of the woo-woo.  But I wasn't ready for the actual details of the claim therein, which turned out to be that gay people are gay...

... because they're being coerced by ghosts.

I bet my LGBT readers had no idea this was what was going on.  I bet they simply thought their brains were wired that way, which is supported by recent studies that showed genetic and epigenetic effects in LGBT individuals that are at least correlated with homosexuality, and may actually be causative.

Nope.  That's not it at all.  The real reason is that you've got a ghost following you around who is making lewd same-sex suggestions, and you're falling for it.

The worst part is that this isn't all they claim, and in fact, isn't even their weirdest claim.  Upon perusing the website, we find out that there are other ways you can tell if you've got a spirit-world hanger-on besides being gay.  Apparently, symptoms are a "foul taste in the mouth," "experience of eyes being pulled inside," "a sticky layer... formed on the face and body of the affected person," and "experience of strangulation."  Then we read the following, which I quote verbatim:


[T]he ghosts (demons, devils, negative energies, etc.) leave the body through any of the nine openings, i.e. two eyes, two nostrils, two ears, mouth, penis/vagina and anus.  The person may experience as if gas is going out of any of these openings or one may experience cough, yawning, burping, sneezing, etc. as per the opening involved.

Allow me to interject here for the good of the order that if any of my readers experience coughing through their eyes, they probably should see a doctor.

And that goes double if your penis burps.

But in the words of the infomercial, "Wait... there's more!"  We also find out that if you have a ghostly groupie, you will "make moaning and weird sounds and not remember anything after," will be "fidgeting and restless," and will be prone to "domestic accidents such as heated oil flying from the frying pan."  Me, I thought the latter was just one of the hazards of cooking, one I first learned about while simultaneously discovering the general rule "Never cook bacon while shirtless."  I don't think I made moaning or weird sounds when it happened, although I do recall using some seriously bad language.

Of course, given that supposedly the affected individual doesn't remember anything afterwards, maybe I've just forgotten about the moaning noises.

But the pièce de résistance is the part about "sexual symptoms," wherein we get to the heart of the matter, which is that if you have a ghostly invisible friend, you'll become gay:


The main reason behind the gay orientation of some men is that they are possessed by female ghosts. It is the female ghost in them that is attracted to other men.  Conversely the attraction to females experienced by some lesbians is due to the presence of male ghosts in them.  The ghost’s consciousness overpowers the person’s normal behaviour to produce the homosexual attraction.  Spiritual research has shown that the cause for homosexual preferences lie predominantly in the spiritual realm.

We're then given some statistics, which is that homosexual orientation is 5% physical causes/hormonal changes, 10% psychological causes, and 85% ghosts.  I have no idea how they derived those numbers, but because it's statistics, it's bound to be correct, right? 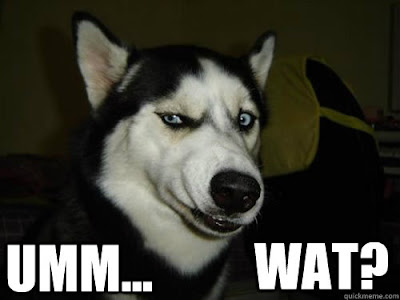 So there you have it.  I'm not sure what else to say that the dog didn't cover.  I think the thing that bothers me about this most is that I'm sure there are people who read this website and nodded, saying, "Yup, makes total sense."  Which is kind of terrifying when you think about it.

Although who knows.  Maybe they have their reasons for believing all this.  Maybe someone was startled one day when her vagina sneezed, and was wondering why, and stumbled on this website.  Makes as much sense as any other explanation I can think of.
Posted by Gordon Bonnet at 3:52 AM